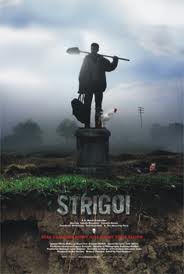 At this point in time it would seem that there's nowhere left for film vampires to go. From Billy the Kid vs. Dracula to Dracula: Dead and Loving It to Let the Right One In all possible film genres have taken a crack at bloodsuckers. Maybe it's time for vampire stories to move on to ballet or Damien Hirst-style installation art. But wait! Here's something new: a vampire film actually filmed in Romania, the country that invented the damn things. And just to add to the novelty factor the film is set in the here and now and features Romanian actors working in English from a script written by an Englishwoman, Faye Jackson, who also directed the film.

.
Another variation is that the undead in this film are called Strigoi, which is evidently a kind of downmarket vampire. The Strigoi, it seems, simply refuse to remain dead due to grievances they have with the living. And although they do take blood, they also seem to be content to gorge on whatever food is handy. The story has Vlad (of course), a medical student, returning to his ancestral village after a failed attempt to make a life for himself in Italy. He's arrived shortly after a local couple, the Tirescus, have been killed by the villagers. The Tirescus were local tyrants first under the Communists as well as after the fall of Ceausescu. Even after death Constantin and Elena Tirescu haunt the village. Constantin still strives to buy up all the land, and Elena is content to eat everyone out of house and home. Vlad tries to be rational about what's going on around him, but in the end he has to do some vampire hunting.

The political message in Strigoi is obvious but interesting; communists, and now capialists, continue to plague the Romanian people with their insatiable thirst for power and wealth and...blood.  The political aspect to the film isn't overplayed, and neither is it a splatterfest. The film's tone is droll, observational, and quite laidback. The actors have to be commended for doing an excellent job in their second language, and despite the low budget the film has a very polished look. It would be a better film if it was shorter and if the humour was not so understated, but it's definitely an interesting addition to the vampire genre.

Email ThisBlogThis!Share to TwitterShare to FacebookShare to Pinterest
Labels: Billy the Kid vs. Dracula, Ceausescu, Dracula: Dead and Loving It, Faye Jackson, Romania, Strigoi, vampires. Let the Right One In