Book Review: The Coming of the Third Reich (2003) by Richard J. Evans 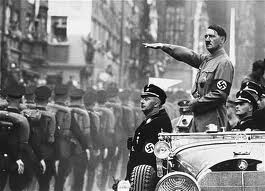 This is the first in a three volume history of the Third Reich, covering the period from 1919-33. And while the author can't offer any new information about this era, he certainly does an admirable job of analyzing and laying out the reasons for the rise of Hitler and the Nazi party.

Evans does a particularly good job of pointing out that the Nazis were not voted into power by the German electorate. It's a popular misconception that Hitler gained power democratically, when in fact the most support the Nazis ever got in a free election was 37% of the vote. The left wing vote was only marginally lower, but it was split between two parties, the Communists and the Social Democrats. The appointment of Hitler as Reich Chancellor in place of Hindenburg in 1933 is what allowed to Nazis to fully grab the reins of power, especially after the Reichstag fire (which wasn't an act of Nazi sabotage) gave Hitler an excuse to declare a state of emergency.

The idea that Germans followed Hitler blindly and unhesitatingly also takes a bit of a drubbing in Evans' analysis. Once Hitler became Reich Chancellor in January 1933, the Nazis, via their SA and SS goon squads, began a reign of terror against anyone and everyone they regarded as a real or possible opponent. Hundreds were killed, thousands beaten up, and tens of thousands were arrested and held in the first concentration camps. Although the terror wasn't on a Stalinist scale, a clear message was sent to the German people that dissent from the Nazi party worldview was a guarantee of harsh persecution.  The hundreds of thousands of Germans who joined the Nazi party at this time were, it would seem, motivated by fear more than ideology.

The author also does a good job of placing the Nazis' anti-Semitism in a historical context. Prior to WW I Germans were probably not Europe's most noted anti-Semites. That title could have been given to the French or Russians. Germany's military failure in WW I and its subsequent economic collapse had many Germans looking for a suitable scapegoat and Jews were, of course, the historically-preferred choice for that role. Beyond that, it would seem that it was Hitler's own pathological, visceral loathing of Jews that motivated the Nazi party to move from harassment to persecution to genocide.

There's an interesting parallel that can be drawn between the Nazi party and contemporary right-wing movements such as the Tea Party. The Nazis never had a rational political platform or philosophy. Their "politics" consisted solely of railing against the corruption and ineptitude of the Weimar Republic and appealing to aggressive fantasies about race and nationalism. Likewise, the Tea Party screams that the federal government is incompetent and pernicious, wraps itself in the flag at all times, sees America as preordained to rule the world, and has a thinly disguised dislike of Americans who aren't white and Christian. In both cases, the real or perceived failure of central government provides the impetus for a kind of blind, unreasoning anger that finds expression in a political party built around slogans and imagery rather than coherent policy.
Posted by Cary Watson at 12:11 AM