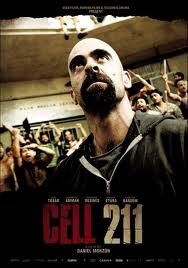 I so looked forward to this film. It's high concept from the word go: a new prison guard named Juan, still in civvies, gets caught up in a prison riot in the wing housing the worst of the worst. Once the prisoners take control of the wing Juan has to convince the prisoners that he's a newly arrived convict. To add to his problems his pregnant wife on the outside is trying to contact him and the prisoners have a corrupt guard who's leaking them information.

With a story idea this good it's no surprise Hollywood grabbed the remake rights in record time. I have a sneaky feeling they might do a better job than the Spanish original. Cell 211 is good, but it just doesn't live up to its clever premise. The first problem is that Juan becomes the right hand man of Malmadre, the prison's daddy, in no time flat. Although this bond allows for some plot complications and keeps Juan at the centre of the action, it just defies belief. Malmadre is supposed to be tougher than beef jerky left out in the sun, and yet he bonds with weedy, middle-class Juan in what seems like a matter of minutes.

With equal rapidity Juan begins to sympathize with the prisoners, who face brutal conditions and, on occasion, brutal guards. This Stockholm syndrome part of the story is an OK idea but it's handled in a pretty obvious way and it's questionable how much sympathy we feel for these prisoners. The final act of the film is especially disappointing. A death that takes place outside the prison removes Juan's motivation for hiding his identity, and Malmadre faces an attack on his top dog position in the prison that isn't setup at all well. These two plot holes left me applauding the film for its original concept, but wondering why they couldn't do a better job with the execution. So much of the film's tension ends up being frittered away because the plot simply asks us to suspend our disbelief too often.

Email ThisBlogThis!Share to TwitterShare to FacebookShare to Pinterest
Labels: Cell 211