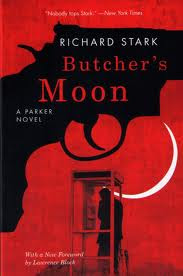 In 1962 Donald E. Westlake, writing as Richard Stark, introduced the character of Parker, a professional thief who is as remorseless as he is efficient. This first novel was The Hunter (filmed as Point Blank with Lee Marvin) and it probably marks the beginning of the modern American crime novel. Prior to The Hunter crime novels were largely about detectives and detection, and stories about criminals usually ended with the crooks caught or killed. Stark changed all that. Parker always lives to steal another day, and he usually leaves a high body count in his wake. And Parker's no Robin Hood; he steals for himself, and if his accomplices are caught or killed that's their bad luck. Parker isn't just hardboiled, he's frozen in carbonite.

One of the chief pleasures of the Parker novels is the plotting. The stories begin at a dead run and then rarely pause for a breath. Parker and his confederates always plan their heists to the last detail, but then something usually goes awry, and Parker ends up avoiding pursuers or doing some pursuing himself. Sometimes he's doing both at the same time. Despite the breathlessness of the plotting, Stark takes care to add some depth and shading to even minor characters, and he can also add humour here and there; in Butcher's Moon, in the middle of a casino heist, two thieves and the casino operator they're robbing suddenly have a ridiculously passionate discussion about health food and fitness.

It's easy to see the influence Stark had on Elmore Leonard, who began his crime writing career just as Stark was winding down the Parker series. Leonard's plots are also about criminal plots that go off the rails, his heroes are often Parker-like, and Leonard's novels always feature humorous, parenthetical moments. And Leonard in turn has influenced a host of other writers and filmmakers (step forward Mr Tarantino). The character of Parker has also been reborn in Lee Child's Jack Reacher thrillers. The Reacher character is definitely on the right side of the law, but his ruthlessness, his skill, his matter-of-fact approach to danger is pure Parker.

In Butcher's Moon, Parker and his frequent partner Alan Grofield travel to a small city in Ohio to reclaim a stash of money they'd hidden there years before. The money is missing and the finger of blame points towards the head of the local crime syndicate. Parker wants his money and applies pressure to the crime boss, but that ends with Grofield being wounded and captured. Parker then assembles a gang of thieves he's worked with in previous novels and they begin an all-out assault on the syndicate's men and businesses. Things get very exciting and very bloody.

Butcher's Moon, written in 1974, marks the end of "old" Parker. In 1999 Stark resumed writing Parker novels and these very definitely gave us a "new" Parker. New Parker is even better than old Parker. Old Parker novels occasionally suffer from stilted tough-guy dialogue, and the depiction of women can be summed up by the fact that they're usually referred to as "broads" or "dames." Also, the plots of some of the old Parkers sometimes bordered on the farfetched, straying out of the crime genre and into action/adventure. Butcher's Moon suffers a bit from this last problem, but in other respects it's a bridge to new Parker. The dialogue is free of cliche and there's no blatant sexism.

New Parker began with the aptly-titled Comeback, and in all respects Stark's writing is better. The plots are more unpredictable and believable, the dialogue is leaner and devoid of cliches, and Parker is made more human, but no less implacable and lethal, by the addition of a steady girlfriend. The best of the new Parkers is Breakout, which features both a prison escape and a heist. I suspect Stark brought back Parker because he felt a bit miffed that Leonard, Child, and others were getting rich in a genre that was largely his creation.

Check out the trailer for Point Blank below, but be warned that while it's superb, it makes significant departures from the book.