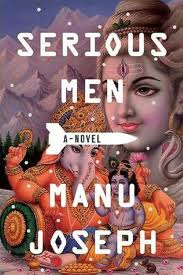 One of the more common motifs from folktales is that of the clever servant or peasant who gets the better of the rich and powerful. Manu Joseph brings this motif to contemporary Mumbai with his darkly comic story of a clerk named Ayyan who works at the Institure of Theory and Research. The Institute is filled with India's best and brightest eggheads, led by Arivind Acharya, a physicist of international renown. Ayyan is Acharya's personal clerk.

Ayyan is not only clever, he's also mischievous, rather like one of the  lesser gods from various mythologies who enjoy causing disorder. As the story begins Ayyan is constructing an elaborate ruse to make his peers believe that Adi, his 11 year-old son, is a genius. Through some simple tricks, and with Adi's willing participation, even the Press starts taking notice of Adi. At the Institure, meanwhile, the arrival of a beautiful female scientist throws the all-male facility into a subdued uproar. Oparna, the female scientist, also has a gift for disorder, but her aims are more malicious. You could almost call her a manifestation of Kali. She initiates an affair with Acharya that has disastrous consequences for both of them.

Joseph's aim with this novel is to show the great gulf that exists in modern India between the educated Brahmin elites and the hundreds of millions of others who live in squalid apartment blocks and raise their children with no expectation that they will see a better future. And this goes double for the Dalits (or Untouchables), India's despised underclass. Ayyan is a Dalit, and his mischief-making is explicitly a reaction to the disdain and prejudice he receives from the Brahmin world. All this sounds dreary and depressing, but Joseph has a light touch and Ayyan's scheming is done as much to raise his son's spirits as it is for his own pleasure.

One of the more elegant jokes in the novel revolves around the fact that while the boffins are caught up in an acrimonious battle over the best way to search for extraterrestrial life, they are woefully ignorant about the lives of ordinary Indians, who are as alien to them as anything outside Earth's atmosphere. And for all their intelligence and modernity, the scientists traditional dislike of Dalits almost proves their undoing.

Serious Men comes close to being a flawless novel, but what holds it back is the character of Oparna. I suppose at one level she's supposed to represent India's other underclass, it's women, but she's more of a plot device than a character. Her affair with Acharya causes several kinds of chaos, but her attraction to him is inexplicable. He's a lot older, he's unattractive, and he barely talks to her. It's also unclear why she takes a cruel revenge on Acharya after he ends the brief affair. All in all, she's not much more than a one-dimensional femme fatale.

Despite the problems with Oparna, Serious Men is an excellent novel that's a pleasure to read even if your knowledge of Indian society and culture is limited to Indian restaurants.
Posted by Cary Watson at 8:56 PM