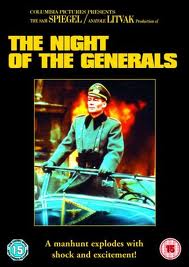 Despite what the cover art on the DVD box might indicate, this is not an action movie about WW II. This is a murder mystery set in Warsaw and Paris about a Nazi general with a fondness for butchering prostitutes. The film begins with the discovery of a dead prostitute in Warsaw, and the investigation is handled by Grau, a major in German intelligence. He learns from an eyewitness that the man seen leaving the dead woman's flat was wearing the uniform of a German general. Grau, played by Omar Sharif, learns that there were only three generals in Warsaw that night who do not have an alibi: Generals Kahlenberg, Gabler and Tanz. The generals are played by, respectively, Donald Pleasance, Charles Gray and Peter O'Toole.

Grau attempts to question the generals but is rebuffed, and then finds himself transferred to Paris. The story picks up two years later with the Allies about to enter the city and the three generals all, once again, in the same city. In truth, the film doesn't offer much of a murder mystery. It's patently obvious from the beginning that the Peter O'Toole character is the killer, and Grau does little of what could be called investigative work.

What makes this film entertaining is the cast, which, with the exception of Sharif, is all-British. This seems to have produced a healthy spirit of competition amongst them because they don't stint on trying to upstage each other. Pleasance does a fine job of combining acerbic wit and humanity, and Charles Gray, who made a career out of playing upper-class weasels, gives us a weasel with knobs on and oak leaf clusters. But the star attraction here is O'Toole, who goes over the top and around the bend as a Nazi madman. Tanz isn't just a serial killer, he's also a kleptomaniac, an alcoholic, and obsessive-compulsive. The highlight of the film, from a thespian point of view, is when Tanz stands before one of Van Gogh's more disturbed self-portraits. O'Toole/Tanz goes through a brief, but epic, nervous breakdown that the director must have enjoyed so much he has Tanz revisit the portrait the next day to have another freakout. As a demented killer, O'Toole's Tanz is right up there with Anthony Hopkins' Hannibal Lecter; both performances are hammy, but in both cases it's Grade A artisanal ham.

The script might not offer us much of a mystery, but it is intelligently written and there is lots of crisp, witty dialogue for the Brits to tuck into. The novel the film was based on is by H.H. Kirst, and I definitely want to check him out.