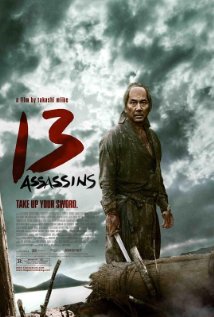 The plot of most samurai films, like most kung fu films, is largely irrelevant. We're not watching samurai films to get a keener understanding of clan rivalries in feudal Japan. Nor are most samurai film fans obsessed with bushido, the samurai code of honour; we're just glad it existed so that samurai would have a handy excuse for slicing each other up. We watch samurai films for the swordplay, and 13 Assassins delivers mayhem in industrial quantities. The plot, for those who care, pits 12 samurai and one agile, deadly peasant against Lord Naritsugu and his 200 soldiers. Naritsugu must be killed because, well, he's so evil. How evil? If Hitler had an even more evil twin brother he wouldn't be as evil as this guy.

13 Assassins would be unremarkable if it was all about the body count. The Lone Wolf and Cub series of samurai films made in the 1970s were just as bloody, but they were short on artistry. Takeshi Miike, the director of 13 Assassins, shows a fine appreciation for the formal pleasures of the best samurai films. In the first half of the film characters are introduced and the plot is developed. Most of these scenes take place inside minimally furnished noble houses. For a director and cinematographer these are demanding scenes because all you're filming are people kneeling and talking in nearly bare rooms. There's very little to engage the eye. Miike makes the scenes come alive with beautifully lit and composed shots that are a pleasure all by themselves. And when the action moves outdoors, Miike and his cameraman are equally adept at framing figures and groups of soldiers against classic Japanese landscapes.

And the swordplay? Top notch, and there's lots of it. Some scenes in the final battle are a little over the top, and the warrior-peasant makes a remarkable recovery from a major injury, but all in all this film has to belong in the Premier League of samurai films.
Posted by Cary Watson at 10:34 PM