Book Review: A Renegade History of the United States (2010) by Thaddeus Russell 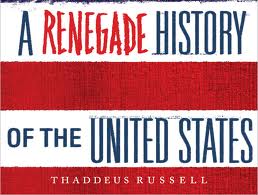 Where do I begin to describe the nonsensical and illogical nature of this book? It's thesis, in a nutshell, is that America's rights and freedoms are not due to the actions of politicians, social activists, and deep thinkers, but are thanks to the actions of "renegades" of various stripes, dating from colonial America right up until the late 1960s. Renegades, in Russell's view, consistently rejected the status quo, the norms of capitalist society, in favour of individual expression and pleasure. In short, renegades didn't want to be cogs in a machine.

The author takes us on a quick tour through U.S. history, stopping at different points to argue that various criminal, social and economic underclasses were in fact fighting for freedoms that we all now take for granted. The underclasses, Russell argues, were always despised by those above them because they refused to conform to the model of what constitutes an efficient, reliable and moral American citizen. In a section on slavery Russell opines that slaves who shirked or sabotaged work on plantations were, in some way, standing up to conformity and the harsh Protestant work ethic. Russell ignores the fact that slaves, or those who are de facto slaves, have always been bad workers. One of the stock characters in classical literature is the lazy, scheming slave, who in Elizabethan literature became the lazy, scheming servant. Russian serfs were equally famous for being grossly lazy and inefficient. It would hard, though, to argue that slaves, servants and serfs ever acted as agents of social change.

If Russell was simply trying to prove that renegades were able to influence social mores that would be fine, but he also has some political axes to grind. This is most obvious in his section on the New Deal, in which he argues that fascism and New Deal liberalism were largely one and the same. This view is much in favour with Tea Party ideologues and Fox News, but it doesn't stand up to close examination. Because both fascist Italy and the New Deal had economic stimulus programs that were, on occasion, identical, Russell leaps to the illogical conclusion that this makes Franklin Roosevelt a quasi-fascist. This is bit like claiming that vegetarians are Nazis because Hitler was a vegetarian. Another problem is that fascism, both in Italy and Germany, was not much concerned with economics. The core features of both strains of fascism, and what dominated the imaginations of Hitler and Mussolini, were muscular, messianic nationalism and a vicious contempt for democratic institutions. Russell clearly doesn't see it that way as he ends his section on the New Deal with this eyebrow-raising statement: "...the New Deal and fascism went to war [WW II] not over ideas or values or a way of life. Rather, it seems, the war was a struggle between brothers for control of the world family." Sounds like someone wants to be invited to Glenn Beck's next barbecue.

Renegade takes a sharp turn into the nonsensical when it looks at the case of Japanese-Americans interned during WW II. Russell states that a significant number of these people were, in fact, loyal to Imperial Japan, and belonged to various organizations that swore loyalty to the Emperor and Japan. What does this have to do with renegades or social change? Nothing. Equally silly is Russell's claim that the beginning of gay liberation, which he dates as 1969, somehow produced heterosexual liberation as well. His proof of heterosexual liberation is that The Joy of Sex, a huge bestseller, was published only four years later. Russell conveniently forgets that popular culture in the post-war era had become increasingly comfortable with the idea of sex before and outside marriage. If there is such as thing as heterosexual liberation it's probably thanks to Hugh Hefner, Russ Meyer, Marilyn Monroe, hippies, the Pill, and James Bond movies.

Russell does make some convincing arguments that nineteenth-century prostitutes played a role in advancing women's rights, and that the civil rights movement, widely hailed as being non-violent, actually benefited from less pacific black protestors. Most of the time, however, Russell uses faulty logic and anecdotal evidence to manufacture proof that "renegades" were unconscious leaders in the fight for individual freedom. In sum, this book feels more like an extended opinion piece than a work of historical scholarship.
Posted by Cary Watson at 2:42 PM