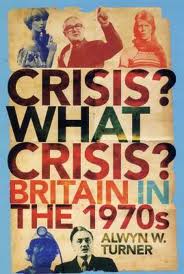 The story of Britain in the 1970s boils down to the relationship between the ruling parties (Labour then Conservative then back to Labour) and organized labour. Turner does a good job of documenting and analyzing the political side of the ledger, but he seems to view unions through the wrong end of the telescope. We hear a lot about their militancy and political muscle, but the background, the base reason for Britain's labour woes (as opposed to, say, Germany's labour calm) isn't really hinted at. Were unions just naturally stroppy? Were they fueled by old grievances? Was it something about their internal culture or organization? There's really no answers to these questions.

On the social history side, Turner provides a skim reading of British popular culture of the 1970s. Everything from David Bowie to Confessions of movies to the travails of the National Theatre are referenced and commented upon. It's all interesting, and a bit of a trip down memory lane for people of a certain age, but Turner doesn't bring a whole lot of insight to the party. For example, he doesn't comment or notice on the sea change in British comedy in that decade, which began with films like Carry On Up the Jungle and ended with The Life of Brian.

I'd recommend this book on basis of its strength as a political history, but keep in mind that when it comes to the role of unions in British society it's pretty much analysis-free. The social history aspect of the book is OK, but it's far from insightful.
Posted by Cary Watson at 3:57 PM

Email ThisBlogThis!Share to TwitterShare to FacebookShare to Pinterest
Labels: Alwyn W. Turner, Carry on Up the Jungle, Conservative, Crisis? What Crisis? Britain in the 1970s, David Bowie, Labour, The life of Brian, the National Theatre, untions