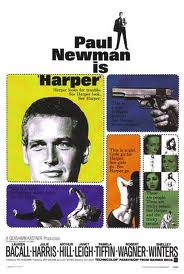 Harper is a pretty good film, but it's more interesting as an example of a Hollywood style of filmmaking that was about to enter its death throes. It's also an example of Hollywood trying, in a halfhearted, clumsy manner, to act cool.

The title character, played by Paul Newman, is a private detective hired to investigate the apparent kidnapping of a wealthy Californian; in other words, a pretty standard gumshoe plot. The movie is based on a Ross MacDonald mystery called The Moving Target. MacDonald was a solid writer who had a way with intricate mysteries that had their roots in long-buried family secrets. Stylistically he's very much of the Raymond Chandler school, although less inclined to have his detective crack wise, as they used to say. In true Hollywood fashion Harper mostly junks the source material by renaming the lead character (Archer in the novels) and jazzing up his character to make him a more suitable vehicle for Paul Newman.

The script, by William Goldman, gives Newman ample opportunity to shine. He's called upon to act silly, sarcastic, tough, downtrodden, lonely, you name it, Newman does it, and it's a borderline hammy performance. Speaking of the script, it amounts to a master class in how to create a slick, punchy screenplay that continually holds the audience's attention. Every scene has a gag, a revelation, some action, an arresting location, and so on. Goldman is sort of the Michael  Bay of scriptwriters; he keeps throwing new things at you so fast you don't have time to pay much attention to the story.

The script also tries to be tougher and nastier than than its P.I. predecessors with some, for 1966, salty language and gritty violence. Harper's roughness pales in comparison to what was coming down the road in the shape of Bonnie and Clyde (1967) and The Wild Bunch (1969). And in terms of edginess, Point Blank (1967) would be soon be setting the bar very high. Harper tries hard to be hip and cool, but it has a sleek, glossy and traditional look that doesn't jive with its desire to be edgy. The supporting character actors, Lauren Bacall, Julie Harris, Janet Leigh and Robert Wagner, are also very old Hollywood. They're competent, but all of them would be scrambling to find work only a few years later in "new" Hollywood. The most dated and clunky part of Harper is the music. In this film rock 'n roll hasn't been invented. Harper's investigation takes him through several nightclubs, all of which play ersatz film approximations of jazz and rock. The most awkward scene has a teenage sex kitten played by Pamela Tiffin dancing to what sounds like cha-cha music. Did Hollywood really think teenagers were dancing to this kind of thing? You can see that scene in the trailer below, which is itself a creaky example of Hollywood promotion.

If you can look past Harper's dated elements it remains a mostly entertaining mystery-thriller. Paul Newman is particularly fun to watch, and some of the California locations have a nostalgic appeal to them.

We are very much of the same mind about Harper. I wonder if this movie marked the apex of Pamela Tiffin's career.

Yes, Tiffin's career went from Harper to Euro exploitation films and then early retirement. But she was in Billy Wilder's One, Two, Three prior to Harper.