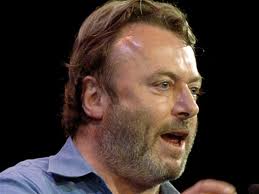 There's really no debate about the fact that Christopher Hitchens was a brilliant writer. His essays, opinion pieces and columns are models of logical argument, wit, and eloquence. And unlike many columnists, Hitchens backed even his most casual opinions with research. In the years to come I think he might be most remembered for leading the charge against faith-based thinking and politics. The conflict between faith and reason is not going away any time soon, and this conflict is not merely a subject for academic debate: there are real-world victims of malicious, fanatical religiosity. Hitchen's God is Not Great is an invaluable resource and weapon for anyone trying to knock down the walls of myth, superstition, and mendacity surrounding the world's major religions. It's a work that will be read up until the day religions fade away, or until the religious triumph and burn every last copy of the book. This is Hitchens at his best.

The political Hitchens, the supporter of the Iraq war and vocal opponent of various tyrants, is more problematic. Hitchens was effective and relentless in detailing the crimes committed by Saddam Hussein, Kim Jong Il, and Iran's ayatollahs, but he never adequately faced up to the human cost of trying to remove these regimes. The Iraq war has, directly and indirectly, cost hundreds of thousands of lives and led to the exile of more than a million others. And no one is predicting that Iraq will be a viable democracy in the future. So far, the victory over Saddam Hussein has been a pyrrhic one for the Iraqi people. The human cost to the U.S. has, in relative terms, been negligible, but the economic cost has been almost as disastrous. America is becoming an also-ran in the global economy, and a large part of the reason is the bill for the Iraq war. The last American soldier left Iraq yesterday, but given the blood toll and prospects for further unrest, it doesn't look like a happy occasion for Iraq or America.

Where Hitchens seemed to go completely off the rails was with his visceral loathing of the Clintons, Bill and Hilary. He accused them of lying, financial misdeeds, cronyism, and of generally using low tactics and sharp elbows to get to the top of the greasy pole of American politics. And on one memorable occasion on Bill Maher's show, a drunk Hitchens actually accused Bill Clinton of rape. Hitchens' hatred of the Clintons made him look foolish and hypocritical. Foolish because the Clintons roughhouse political tactics (if true) are par for the course in post-war American politics. That's the way the game is played. Kennedy turned to the Mafia for political help, Nixon employed burglars, and both George and Dubya Bush ran election campaigns that set new lows for viciousness (the Willie Horton ads, Swift Boat Veterans, lies about Sen. McCain's daughter). And in terms of morals, Bill Clinton's sins don't begin to equal the immorality of the enthusiastic support Nixon and Reagan gave to death squad governments in Central and South America. The charge of hypocrisy sticks thanks to Hitchens support of George W. Bush. Bush, a southern-fried Christian creationist with a limited intellect, is the sort of person Hitchens normally scorned and mocked. In fact, on October, 9, 2000, in The Nation he called Bush an ignoramus and a "special" child. And yet on the day of Obama's Inauguration he stated in Slate that he was glad that Bush had triumphed over Gore and Kerry. Clearly, Hitchens had a conversion on the road to Damascus, or, in this case, Baghdad. It also has to be noted that he never made mention of the collateral damage caused by the Bush administration: reckless deregulation in the financial sector, tax breaks for the wealthy, a rollback of environmental protection measures, and an increased level of anti-intellectualism, something that Hitchens should have been very sensitive to. In supporting Bush, Hitchens was supporting a worldview that was fundamentally hostile to his own. Hitchens had a great intellect, but it was one that sometimes wore blinders.
Posted by Cary Watson at 11:43 PM