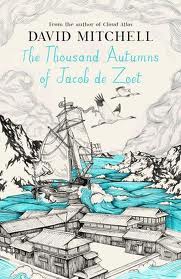 It's clear David Mitchell did a Ph.D's worth of research for this novel set in 1799 Japan, and, unfortunately, every bit of it ends up on the novel's pages. Historical fiction requires a delicate balance between creating a rich and believable historical background while at the same time not allowing it to act as an anchor on the storytelling, and in this case the pudding has been overegged.

The novel's plot is not overly complicated. The titular character arrives at the Dutch trading station of  Dejima in Nagasaki Harbour in 1799 as a simple clerk in the pay of the Dutch East India Company. Jacob soon runs afoul of his scheming and corrupt superior and, more importantly, falls in love with a Japanese midwife named Orito. Orito attracts the attention of Lord Enomoto, a powerful noble who controls a mysterious shrine high in the mountains several days journey from Nagasaki. Orito is enslaved by Enomoto and put to work in the shrine, which turns out to be a perverse and evil cult that sacrifices babies. The bulk of the novel is concerned with Orito's imprisonment in the shrine, and an attempt to rescue her by Ogawa Uzaemon, a member of the samurai class who is also in love with Orito. The final quarter of the novel suddenly introduces a new danger for Jacob: a British frigate comes into Nagasaki Harbour and demands that the Dutch surrender their trading rights.

There's a fair bit going on there, and at times the story proceeds at a gallop, but far too often the novel is marred by narrative digressions and anecdotal asides about characters who are not central to the plot. These literary "speed bumps" become maddening after a while. One example: when the frigate arrives, one of the Dutch contingent (an Irishman, as it happens) is terrified he'll be recognized by a particular British officer. The Irishman was a convict in Australia and escaped after killing a guard. The Irishman's story is told in very full detail, and it all turns out to be redundant since the two never even come close to meeting. This is only one of many speed bumps in the book. Some of them are diverting, but most of them feel like a showoffish display of historical research.

Leaving aside the incessant history lessons, Mitchell's prose has a nice rhythm to it, and his imagery and descriptions are lean and effective. He also gives the novel some extra resonance by making it clear that his characters are part of global changes as well as personal ones. The Japanese characters are coping with the inevitable intrusion of Westerns ideas and technology into their hermetically-sealed culture, while the Dutch are coping with their nation and empire being eclipsed by the British.

The main characters I didn't find terribly compelling. Jacob is conscientious, good at his job, fairly pious, and moral. In short, dull. He's faced with all kinds of difficult choices and situations, but that doesn't change the fact that he's not someone you want to spend a lot of time with. The same can be said for most of the Japanese characters, who, thanks to a repressive, status-conscious society, are terribly circumspect in what they say and do. The most colourful characters are minor ones, and they tend towards the cliche. Marinus, a Dutch doctor, is an Enlightened Man of Science™, and as such his orotund utterances are stuffed with rhetorical flourishes, Latin words and phrases, and the driest wit. He's mildly entertaining, but he feels like a stock character. The working class Dutchmen in Dejima are easily indentified: Mitchell makes them sound like a cross between a Thomas Hardy peasant and Geoffrey Rush's Barbossa character from Pirates of the Caribbean. Did they really need to sound like caricatures to let us know they're not of the same social class as Jacob and Marinus? And speaking of dialogue, Mitchell is overly fond of italicizing key words in almost every spoken passage, as though he doesn't trust the reader to figure out where the emphasis lies in the sentences. It's really irritating.

Autumns has received nothing but rave reviews, which I can only put down to critics rewarding Mitchell for his hard work in the library. As an entertainment, as a piece of historical fiction, Autumns is a distant second to anything by Patrick O'Brian. And better still is Carol Birch's Jamrach's Menagerie (review here), which strikes a perfect balance between history and narrative.
Posted by Cary Watson at 3:24 PM