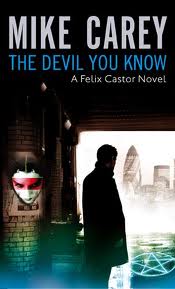 This supernatural thriller/murder mystery is remarkably similar to Rivers of London, a novel I reviewed exactly a month ago. Both novels offer an alternative reality version of London in which ghosts and various supernatural baddies plague the general citizenry. Rivers had a cop/wizard as its hero, while this novel has a freelance exorcist named Felix Castor taking top billing.

Felix specializes in ridding homes and businesses of ghosts. The ghosts in London are just your common or garden variety ghosts, and there are lots of them, but their ordinariness doesn't stop them from scaring the crap out of Londoners, and that's where Castor comes in. He exorcises ghosts with the aid of a tin whistle; he essentially "whistles" them out of existence. That sounds silly, but Carey doesn't an excellent job of making the magical elements in his alternate world feel believable. In relation to this, he also does a great job of what's known in fantasy writing as "world-building." Carey's London is gritty, detailed, and the supernatural elements fit quite smoothly into this milieu. In this story Castor investigates a ghost haunting an archive in central London. He also has to deal with a murderous vice lord with a zombie henchman, and a succubus who wants his soul.

Castor's job title is exorcist, but he's basically a gumshoe: Philip Marlowe in everything but name. And take away the ghosts and demons, and the plot of The Devil You Know is pure hardboiled murder mystery. Castor gets slapped around, cracks wise, and can't resist a damsel (or ghost) in distress. The problem with the plot is that it goes on and on and on. The final quarter of the story, when things should be speeding up, feels bogged down with lengthy background stories and explanatory passages. Devil isn't lardy and prolix the way the final Harry Potter books were, but it definitely would have benefited from some pruning.

Putting aside the plot problems, this is a very entertaining read. The supernatural bits have a visceral thrill, and the characterization is much better than average. In these respects Devil is superior to Rivers of London. Where the latter scores better is the plot, which was lean and efficient, albeit a bit shambolic towards the end. This is the first of six Felix Castor adventures, and I'll definitely give the next one a try.
Posted by Cary Watson at 6:34 PM