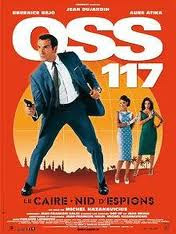 One of the early frontrunners for scooping some of the important Oscars next year is The Artist, a French film directed by Michel Hazanvicius and starring Jean Dujardin. It's been winning prizes at film festivals and it's set for wide release in North America on Dec 9. I don't doubt it's good because Hazanvicius and Dujardin created comedy magic five years ago in OSS 117.

OSS 117 is the codename for a secret agent who appeared in a huge number of pulpy thrillers in Europe in the 1950s. The novels led to some B-grade films and then, many years later, this spy spoof. Now, OSS 117 pre-dated James Bond, and his adventures didn't involve gadgets or supervillains, so bear in mind that this film is not riffing on the world of 007. Jean Dujardin plays Hubert Bonisseur de la Bath, alias OSS 117, and he plays him as an arrogant, patronizing, self-centred, slightly dim and very French exemplar of Western imperialism circa 1955. A French agent has disappeared in Cairo and OSS 117 is sent there to investigate the disappearance. French-Egyptian relations are not improved by his visit.

French comedies sometimes choke to death on high decibel silliness, but this script is a superb mix of wit, satire, slapstick, and, yes, some silliness. What brings it all to life is Jean Dujardin. This is one of the great comedy performances in the last ten years, the highlight of which is a scene involving OSS 117 having to pass himself off as an Arab musician. Dujardin plays the scene as though he was Peter Sellers reincarnated, and Sellers at his most brilliant could not have done a better job.

There's a sequel to Cairo called OSS 117: Rio ne repond plus, and it's good rather than great. Dujardin's other films alternate between drama and comedy, and the ones I've seen have been so-so. One of his earliest comedies was Brice de Nice. It's fairly amusing, and he's very good, but it maxes out on French silliness. So hurry up and hunt down OSS 117: Cairo, Nest of Spies so you can tell people that you knew all about Dujardin before he appeared in The Artist and was nominated for the Best Actor Oscar.