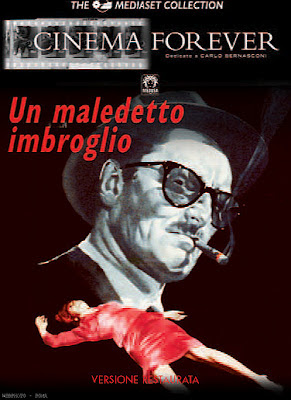 This film was a surprise in several ways. The director and star, Pietro Germi, was a noted creator of satires on Italian society, but in this film he produces one of the better police procedural mysteries I've ever seen. A woman is found murdered in her Rome apartment only a week after a neighboring apartment was burgled. Commissario Ingravallo (Germi) thinks the two crimes may be related, and as the investigation proceeds the list of suspects in the woman's death gets longer and longer. The story gets more complicated, but the solution turns out to be simple yet unexpected.

The first thing that struck me about this film was how modern it felt; it has the same style and tone of any contemporary TV cop show in which detectives rely on teamwork and police procedures to get the job done. Not a lot of time is wasted on extraneous characters or events; the film focuses closely on the detectives and their work and that's what makes the film so engrossing. It also feels very contemporary in the way it balances humorous and serious moments. The two are blended perfectly, and the easiest comparison is to say that, all in all, it felt like an episode of the Italian TV series Detective Montalbano. That series is very good indeed so it's not slighting Un Maladetto Imbroglio to say that it resembles a TV show; in fact, it crossed my mind that Andrea Camilleri, the author of the Montalbano mystery novels, may have been inspired by this film.

Pietro Germi was a triple threat as a writer/director/actor and has a long list of credits, most notably Divorce Italian Style and Seduced and Abandoned. The latter film, in particular, takes a scathing look at Italian society with its story of Sicilian machismo run amok. When the greats of Italian cinema are mentioned, Germi's name doesn't come up often, or at all, but maybe it should.