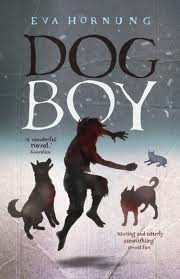 It would be so easy to call this novel a modern take on Kipling's The Jungle Book, but that would do a disservice to Hornung's book, which is emphatically not for kids or the faint of heart. Her Mowgli is Romochka, a four-year-old Russian boy who wakes up one morning to find that his family (his mother and uncle) and all the other tenants of a crumbling apartment block on the outskirts of Moscow have decamped. After several days scrounging food in the apartment block, Romochka ventures out into the city and follows a feral dog back to its den. In short order he's adopted into the dog clan, which is headed by Momochka, a female. Romochka suckles from her and eventually learns to hunt with the pack. The pack's territory is on the edge of Moscow and centres around a huge rubbish dump that is a source of food for both dogs and those dwelling in an adjacent shantytown. The dogs also hunt in the fields and forest nearby, eating anything from grasshoppers to moles to cats. After several years Romochka becomes the leader of the pack, but he's also come to the attention of a research centre that specializes in homeless children with developmental problems. The last third of the novel deals with Romochka's dangerous and tempting interactions with the human world.

The strongest aspect of the novel is probably Hornung's unflinching portrayal of Romochka's life as a "dogboy." She doesn't make any part of the feral life cute or charming, and doesn't hesitate to show the grittiest or most savage details. Hornung also does a brilliant job of imagining exactly what such a life would be like, especially the constant conflict between Romochka's human and dog personalities. This conflict is the heart of the novel as Hornung uses Romochka's more than peculiar situation to look at what constitutes families, and the bonds that pull people (and animals) into relationships, tribes, clans and packs. At a few points the idea that animals are innately kinder to each other than humans gets trotted out, and while it's not preachy or obvious, the novel could do without this kind of anthropomorphism. That aside, this has to rate as a one of a kind gem of a novel. It's not pretty or polite, and Romochka isn't always a pitiable character, but Hornung's managed the hugely difficult task of making a wildly improbable concept believable, affecting and viscerally exciting. And for God's sake don't give this book to kids or dog lovers; both demographics will end up in tears and be angry with you for weeks, if not years.
Posted by Cary Watson at 5:56 PM