Book Review: I Hear the Sirens in the Street (2013) by Adrian McKinty 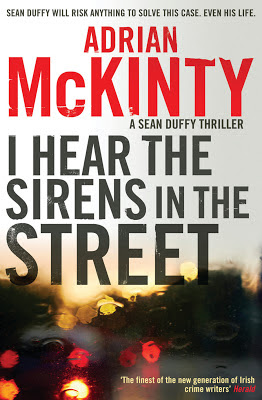 This is the second in Adrian McKinty's trilogy in the making about Inspector Sean Duffy, a cop with the Royal Ulster Constabulary during the Troubles. This novel opens in 1982 with the DeLorean car company offering a glimmer of hope for the battered economy of Northern Ireland while the wars between the IRA and Britain, and between Britain and Argentina, rage in the background. Duffy and his team are called in to investigate the discovery of a torso in a suitcase. The body, it turns out, belonged to a visiting American, and the cause of death is a rare and difficult to acquire poison. The trail lead to Boston and to John DeLorean himself, and ends with more bodies and a lot of bullets flying through the air.

Sirens has many of the same strengths and pleasures as Duffy's previous outing (The Cold Cold Ground, my review here), especially its evocation of a particular time and place. McKinty brings Belfast and its environs to seamy and sad life, and for anyone wondering why the 1980s produced a diaspora of the best and brightest from N.I., this novel provides the answer. And McKinty continues to show he's one of the best in the business at crafting a police procedural; the dynamic between Duffy and his fellow "peelers" is engaging, entertaining, and always rings true.

Having dished out the praise I now have to say that Sirens isn't quite as good as its predecessor. The main problem I had is with the plot, which has some gaping holes I couldn't get past. Without letting slip any spoilers I'll just say that the poison angle seemed far fetched; the trip to Boston felt superfluous and breaks the story's mood; and the disposal of the American's body made no sense considering that the place where he died had a far more obvious and convenient option for making people disappear. These weren't deal breakers in terms of enjoying the novel, but I certainly didn't have these kinds of problems with the plot in the previous novel.

A more minor problem has to do with Sean Duffy: the more he's off investigating on his own (he does that a lot here), the less interesting a character he is. When he's interacting with fellow cops the story, and his character, has an elan and energy that seems to go AWOL when he's on his own. I think the problem may be that Duffy as a solo operator feels like a lot of other fictional detectives, a strongly-realized detective, but not the standout character he is when he's part of a team. But that's a minor quibble. Duffy is still a cut above most of his fictional peers, and I'm hoping that by some means McKinty can be convinced to keep Duffy going past the next novel.
Posted by Cary Watson at 4:54 PM