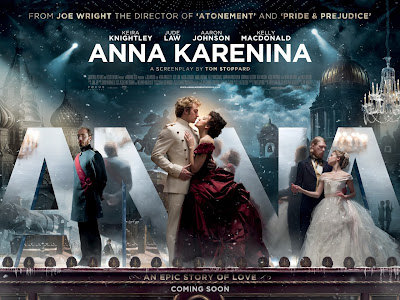 Full credit to director Joe Wright for doing something different to bring to life this classic nineteenth-century novel about infidelity. There have been nearly a dozen adaptations of Tolstoy's novel done over the years, going all the way back to a Greta Garbo-starring version in 1935. What they have in common is that they've all taken a realistic approach: lots of wintery sets and locations, and, as far as possible, every effort's been made to transport the audience to the Russia of 1874. Wright sets the action of the novel almost entirely inside a theatre, and, just like an ambitious, mega-budget theatrical production, he mounts all the big events of the novel (a horse race, balls, train arrivals) inside the theatre. It's a refreshing change from the usual Masterpiece Theatre approach to adapting novels like this for the big and small screens.

The film's theatrical approach is certainly clever and visually arresting, but in the first quarter of the film it almost becomes too distracting; at various points Wright's stylized approach goes a step too far and what looks like a theatre production threatens to become some kind of ghastly Lloyd Weber musical: characters move around the "stage" in a sort of walk/dance, the music rises, and I extended a quivering finger to hit the STOP button in anticipation of Keira Knightley belting out a tune called "I Just Met a Man Named Vronsky." Thankfully, the film settles down and concentrates more on the story and less on the stage trickery.

On the whole this is a decent film version of the novel, mostly held together by the acting of Jude Law as Anna's saintly husband, and Matthew MacFadyen as Oblonsky, Anna's brother. The rest of the cast give polished, professional performances, and then we get to Keira Knightley: she's got acting energy to burn, but her acting is also a distracting combination of the hammy and the hysterical. She's all twitches and manic grins, which works part of the time, but on the whole the performance would have benefited from a leavening of subtlety. But the weakest member of the cast is Aaron Taylor-Johnson as Vronsky. He doesn't bring much to the party except an ability to fill out a period costume in a pleasing manner, and every time Jude Law comes on screen one is reminded that he would have been the first choice to play Vronsky ten or so years ago, and he would have done a far better job. Anna Karenina is worth seeing if only because it gives us a bracing re-imagining of how to translate nineteenth-century literature for the twenty-first.