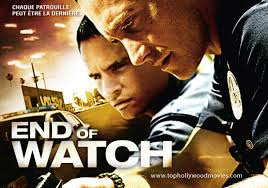 I suppose it was inevitable that one day we'd get a cop film that looks, more or less, like a wildly dramatic episode of Cops. Reality shows about various aspects of law enforcement, all of them shot on the run and with handheld cameras, are a dime a dozen and have been around for well over a decade. End of Watch is shot with all kinds of handheld cameras, many of them wielded by the characters themselves. Jake Gyllenhaal is the main character and carries a camera with him everywhere as part of course assignment for some college course he's taking. Other POVs in the film come from dashcams, surveillance cameras, and a camera handled by one member of a group Mexican gangbangers. The reality TV show aesthetic of the film actually works in its favour. We now view and understand the cop world through this kind of lens, so the rough and ready look of the film allows us to immediately become immersed in life on the mean streets of L.A.

As distinctive as the look of the film is, in all other respects it's as old school as an episode of Dragnet. Our two cops, Brian and Mike, ride a patrol car in south L.A. and answer the kind of calls that we've seen in a hundred different episodes of various reality TV cop shows. This being a film, the crimes and incidents are amped up (lots of blood, bullets and bravery), but basically we've seen this kind of thing before. As familiar as the format is, End of Watch manages to get its hooks into you. Brian and Mike are properly rough-edged as cops working the bad side of town should be, but in between the macho banter and bluster we see that they're, well, a lovely pair of guys. It's here that the film shows its traditional roots. The script goes a bit out of its way to make us like Brian (he gets married!) and Mike (he and his wife just had their first child!), which if you've paid attention to any cop film in the last forty years means that one or both run a high risk of getting killed. The plot is breezily uncomplicated. Through sheer happenstance our two cops bust two operations run by the same Mexican cartel, et voila: the cartel orders some local gangbangers to kill them. I'll say no more, but the finale is pretty bullet-riddled.

End of Watch is successful in the moment: fast-paced, well-acted, tense, violent, but a half hour after viewing it's blended into every cop show/film you've ever seen. A more complex plot would've helped lodge it in the memory cells, and I could have done without some over-the-top sentimentality and villains who are pit bulls in human form. Considering how uncommon realistic cop films are these days, I'm just happy Brian and Mike weren't on the trail of some kind of bizarro serial killer.
Posted by Cary Watson at 9:13 PM

The found-footage format weaves in-and-out and seems a bit dumb for the material, but still doesn’t distract us from the pitch-perfect chemistry of these two guys that are as entertaining and interesting to watch as any other cop in recent cop movies. Great review Cary.

Thanks, Dan. Yes, the use of found footage is inconsistently used, but, as you pointed out, the chemistry comes to the rescue. I'd like to see a lot more of Michael Pena.