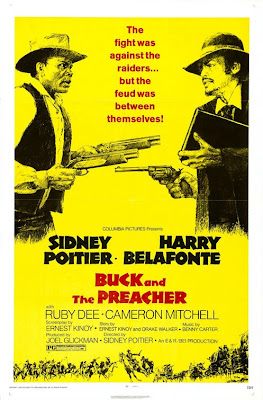 In the 1950s and '60s there were only two Great Actors in Hollywood, and by great I mean the actors who got the lead roles in Significant Movies that had Big Messages and told Important Stories. Those actors were Sidney Poitier and Charlton Heston. Between the two of them they headlined most of the prestige movies of that era, the kind of films that made Hollywood moguls feel that their profession wasn't all about the popcorn and building baroque Beverly Hills mansions equipped with hot and cold running starlets. The firm of Poitier & Heston brought their talents to films such as The Defiant Ones, The Ten Commandments, A Patch of Blue, Ben-Hur, Guess Who's Coming to Dinner, El Cid and In the Heat of the Night. Many an Oscar found its way into mogul hands thanks to those two actors. And both men had an acting style that matched the gravitas of the films they were in: earnest, restrained, tasteful, and professional; none of that Method nonsense for them.

When the '70s arrived Poitier & Heston Inc. fell on hard times. The Method acting boys were taking over and the moguls stopped making the kind of films that matched the talents of a Heston or Poitier. Heston made a shrewd move to shiny, B-grade action films like Skyjacked, Soylent Green, The Omega Man and Two-Minute Warning. Poitier had a harder time of it. His role in Hollywood was to portray the Noble Negro Fighting Intolerance. That kind of role went the way of the dodo thanks to the cultural aftershocks created by the riots in Watts and Detroit, which in turn led to blacksploitation cinema. Poitier's Eisenhower-era acting style  and Joe College persona had no place in films with people like Jim Brown, Fred Williamson and Pam Grier.

Poitier tried to take a stab at blacksploitation with Buck and the Preacher, a western he directed as well as starred in. It's pretty poor. The paint-by-numbers plot has Poitier leading some settlers across the west. The black power wrinkle to this standard horse opera plot is that the settlers are ex-slaves fleeing the post-Civil War South. The settlers are harassed and attacked by a group of white gunmen who have been employed to drive blacks back to the South so that they can resume their menial lives on plantations. Episodes of Bonanza had more complex plots than this film offers, so the less said about it the better. You can sense that Poitier wanted to show an angrier, meaner side of himself, and certainly his character shoots a lot of bad white guys, but his heart doesn't seem to be in it: he remains the stolid, conservative actor who's afraid of doing or saying anything distasteful. And as a director Poitier does himself no favours. With one exception the performances are flat and in terms of visuals the film has no flair at all. In sum, this has to be nerdiest blacksploitation film ever made; it feels like it should be shown in classrooms on Martin Luther King day. The only ray of light comes from Harry Belafonte, who plays a gun-toting preacher. He hams it up pretty thoroughly and the film would be absolutely dire if he hadn't.

There's really no reason to seek out this film except to witness how a cultural shift managed to derail the career of a highly-regarded actor. Poitier made a handful of films after this outing and then went into semi-retirement from 1977-88. It's unfortunate he didn't try and reinvent himself as a character actor in the '70s, because way back in 1964 he showed he was good at that job in The Long Ships (review here), a B-movie that Poitier could have taken lessons from when it came to how to direct an energetic, entertaining film.
Posted by Cary Watson at 2:33 PM