Book Review: The Mamur Zapt and the Donkey-Vous (1990) by Michael Pearce 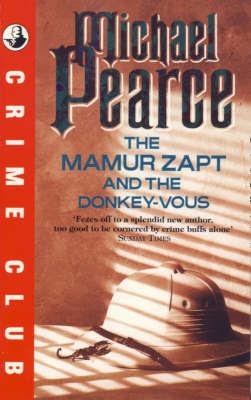 Cosy mysteries are not my thing. In fact, I'm not even sure I've read one unless you count all the Agatha Christie's I read as a teenager. It's been noir and hardboiled for me for a very long time. I make an exception for Michael Pearce. His Mamur Zapt mysteries (17 in all) are sometimes described as cosy mysteries, and he certainly doesn't go in for sex, violence and grisly forensic details, but there the similarity ends. It would be more accurate to say that he writes historical fiction that happens to include mystery elements. His novels are set in British-ruled Egypt just before World War I. The Mamur Zapt is the Egyptian title given to the head of Political Intelligence in Egypt. The job, however, is always filled by a Brit, or in this case a Welshman named Captain Owen. Owen investigates crimes both high and low, but only if they have a whiff of the political about them.

In this novel Owen is called upon to investigate the kidnappings of two tourists from the terrace of Shepheard's, the best hotel in Cairo. What looks like a simple crime for profit soon gets more complicated, with links developing to a terrorist group and the Khedive, Egypt's symbolic head of state. Owen not only has to juggle the political aspects of the case but also figure out something of a locked room puzzle: how did two men vanish in broad daylight from a busy hotel terrace?

The real appeal of these novels is the way Pearce recreates Edwardian Egypt. This isn't a fictional Egypt you'd expect; there are no moonlit, romantic interludes in the shadow of the pyramids; no swarthy villains with knives clutched between their teeth; and there's definitely no ancient curses or ambulatory corpses wrapped in bandages. What Pearce concentrates on are the dynamics and tensions of a colonial power, as represented by Owen, attempting to control a country that is seething with nationalist and revolutionary ambitions. Owen is very sympathetic to Egyptian sensibilities and is never patronizing when dealing with his Egyptian subordinates. Pearce, who was raised in Anglo-Egyptian Sudan, also earns praise for his refreshing portrayal of Egypt's working classes. When writing dialogue for foreign members of the "lower" classes, most English writers choose to represent their subject's class by having them speak in pidgin English, broken English, or in some version of a Cockney or Yorkshire accent when they're speaking in their own language. In this novel a good number of characters are humble street vendors, but you wouldn't know it by the way they talk. Since they're speaking in Arabic (Owen also speaks Arabic), Pearce makes their speech grammatical and free of malapropisms, as you would reasonably expect. It's nice to see Pearce, like Owen, showing this kind of respect for his characters. For contrast check out the way David Mitchell wrote dialogue for his lower-class Dutch characters in his bestselling The Thousand Autumns of Jacob de Zoet.

The mystery at the heart of this particular novel is cleverly constructed and revealed, and along the way Pearce effortlessly and elegantly describes the social and political character of Edwardian Cairo. Pearce is a very good writer, particularly of dialogue; like some of the better English writers he has a knack of having his characters speak little but say a lot: a simple phrase like "I see" can have a wealth of meaning in Pearce's hands. And he's also adept at dry, droll humor; in fact, his 1992 novel The Mamur Zapt and the Spoils of Egypt won the won the Crime Writer's Association Last Laugh Award for funniest crime novel. If you normally cringe at the idea of reading a cosy, or being seen reading one, give Pearce a try and tell people you're reading a sharply-written study of colonialism and nascent Arab nationalism. You won't be wrong.