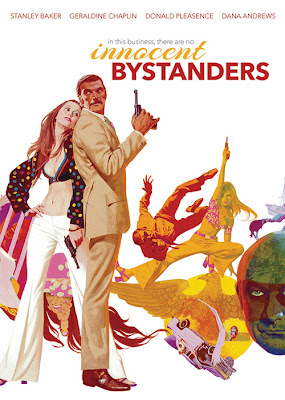 Bad movies, like the poor, are always with us. If you think today's big budget craptaculars like the Transformers films are bad, at the very least you have to admit that they're made to a professional standard. This 1972 spy film is a reminder that once upon a time a middling budget genre film could actually get made by people who, based on the evidence at hand, had no idea what they were doing. To be fair that's a bit of an exaggeration. The director, Peter Collinson, did the original The Italian Job, but it stands as a lonely beacon of excellence in a filmography wilderness of rotgut genre pictures.

The plot is a tired bit of boilerplate about a Russian scientist who's defected...everyone wants him...old dog spy given last chance...double-crosses...rinse, lather, repeat. There are holes aplenty in the story, but that's not a deal breaker for this kind of film as long as it's done with style, wit and pugnacity. No such luck. It looks ugly, with cheap sets and some really inept camerawork. And special mention has to go to the decision to have Spain double for Maine, which leads to the novel sight of a car driving through the maquis landscape of New England. The action elements are minimal, and some decent fight scenes don't make up for car chases and shootouts that would look bad even on a TV cop show of the era. And the acting? Stanley Baker, the star of the film, does a workmanlike job, but the rest of the troupe are either miscast or sleepwalk through their roles.

The real tragedy of Innocent Bystanders is that it's a reminder that Stanley Baker never got the big break he deserved. After producing and co-starring in Zulu (my review here), he looked set to join the rising tide of Brit stars like Caine, Finney, and O'Toole. His subsequent films either did no business, were critical duds, or both. Part of the problem was that Baker was a capable, but not great actor, and also that he looked like Sean Connery's stunt double. In fact a lot of his films seem like projects the producers probably wished they could afford to have Connery in, but they had to settle for Stanley. By the way, don't let the cover art on the DVD box (pictured above) fool you: if the film was one-tenth as cool as this it would be worth watching.
Posted by Cary Watson at 4:05 PM

I think you're being extremely unfair on Baker, there. While he never broke into Hollywood, his track record in Britain from the late fifties to the late sixties was first-rate. Yesterday's Enemy, Violent Playground, Hell is a City, A Prize of Arms, Hell Drivers, The Criminal,The Accident and Robbery are all cracking films. Besides, many of the British actors of the period who did cross the Atlantic simply ended up giving lazy, coke and alcohol-fueled performances in some very bad films.