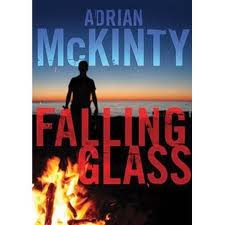 If you've read McKinty's Michael Forsythe trilogy (Dead I May Well Be, The Dead Yard, The Bloomsday Dead) your enjoyment of Falling Glass may be slightly impaired. The reason is that the shadow of Michael Forsythe looms large over this thriller. Forsythe is a compelling character: crafty, funny, tough, ruthless, and a great observer of the world around him. He's always the most interesting (and dangerous) person in the room. Forsythe makes a few appearances in Falling Glass and that means Killian, the lead character, suffers by comparison. Killian is an adequate hero, but he just feels like a slightly paler version of Forsythe. Much is made of the fact that Killian is an Irish Traveller, but his ethnicity doesn't translate into a character who's significantly different from Forsythe.

As a thriller, Falling Glass is in the Premier League. This is largely because McKinty does not try and put his plots together like a Swiss watch. A great many thrillers have a flowchart feel to them: plot point follows plot point in reliable progression, and even the surprises have a predictable feel to them. In McKinty's plots, as in the real world, shit happens. That means plans and schemes suddenly go pear-shaped and cause stories to spin off in unexpected directions. In Dead I May Well Be what begins as a crime thriller suddenly becomes an escape from prison thriller. The prison section of that novel is a classic of its kind.

This novel has Killian, a semi-retired tough guy, being tasked with finding the ex-wife of a Northern Irish aviation tycoon named Coulter. The woman, Rachel, is a barely recovering drug addict and has two young daughters. She also has a laptop that contains very damaging information about Coulter. It's because of the laptop that Coulter, unbeknownst to Killian, has sent Markov, a Russian hitman, after Killian. Once Killian finds Rachel, Markov's job is to kill her and recover the laptop. Killian discovers what Markov's purpose is and he decides to protect Rachel and her girls. Cue the tension, the violence, and a very unexpected conclusion. The plotting here isn't quite up to the standard of the Forsythe novels, but it's still very good. The main drawback is that things don't get underway quickly enough thanks to sidetrips to Mexico and Macau that aren't really necessary.

Falling Glass, like the trilogy, isn't all about the running, the hiding, the shooting, and the killing. McKinty is a literary writer. He writes dialogue that's so lively it practically dances, and his characters certainly have far more depth than is usual in a thriller. In this novel he even brings some layers to Markov. Implacable, taciturn Russian hitmen are a dime a dozen in pop culture, but Markov is allowed to be more than just a walking, talking gun.

The most interesting aspect to this novel is that Killian, Rachel, and Markov seem to be trapped in their roles by forces beyond their control. Killian was out of the crime game until the collapse of the Irish economy; Rachel is a prisoner of drug addiction; and Markov is the warped product of the fall of the U.S.S.R and the brutality of the Russian military. Even Coulter is suffering through a meltdown in the airline business. In short, the drama we see is a by-product of collapsing societies and economies. In contrast to this are the Travellers, who give shelter to Killian and Rachel. Their traditional, communal, tribal, nomadic existence seems idyllic and healthy in comparison to the harsh realities of the straight world.

The conclusion to Falling Glass is really going to annoy some people. I thought it was the highlight of the novel. It's The Italian Job cliffhanger with a subtle twist. The twist is that the two participants are, I'm guessing, stand-ins for the twin poles of Irish history: the lyrical and the profanely violent. In literary terms Ireland has been punching above its weight for a very long time, but, by the same token, it's also known an amazing amount of violence and tragedy for an island that would fit quite easily into southern Ontario.

Falling Glass would be up there with the Forsythe novels but for the character of Killian, and some imagery and metaphors that feel forced and awkward. But that's nitpicking. This is still one of the best thrillers I've read this year.
Posted by Cary Watson at 9:10 PM

Thanks man, I appreciate the review!