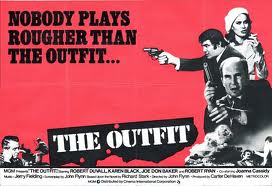 I've written previously about the Parker novels by Richard Stark on this blog (you can read the post here), and this early 1970s adaptation of the novel by the same name comes closest to capturing the flavour of Stark's writing. Point Blank is the best film made from a Parker novel, but it's not really true to the spirit of the books. And although The Outfit feels more like its source material, it still manages to miss the boat. It's entertaining, but there's some wonkiness that's hard to overlook.

The first oddity is that short, balding Robert Duvall is cast in the Parker role. Now Duvall can play tough, but he just doesn't appear tough (why does he hold his gun in that odd way?), and Parker is certainly described as looking rangy and menacing. The second oddity is that his character is called Earl Macklin instead of Parker. I can't even guess why that change was made. Joe Don Baker plays Macklin's sidekick and he would have been a much better choice for the Parker character.

The story is one that Stark would recycle in Butcher's Moon: the Outfit has killed Macklin's brother in retaliation for he and Earl having robbed a bank a few years previously that was controlled by the Outfit. Macklin goes to the Outfit's boss and demands a payment of 250k as a penalty for killing his brother (such brotherly love). The Outfit refuses, and Macklin and his sidekick begin knocking over Outfit properties until they agree to pay the "fine." They try to double-cross Macklin and that turns out to be a bad idea.

And now a word about the Outfit. The Outfit is a feature of the old Parker novels, and it's one that now feels somewhat dated. To a certain degree it plays the role that SPECTRE did in the James Bond novels. Both are highly organized criminal enterprises with interests in all kinds of criminal activity. The Outfit is essentially the Mafia, only it seems to be run entirely run by WASPy types. In Parker's world, every city has a parallel criminal economy, and it's all run by the Outfit.

The scenes of Macklin knocking over Outfit properties are done very well, and a lot of Stark's terse, muscular dialogue makes it to the screen to great effect. The acting is equally fine, which isn't surprising given that cast is stuffed with veteran character actors, everyone from Elisha Cook to Robert Ryan. Some parts are more uneven. Bruce Surtees is the cinematographer (he shot a lot Clint Eastwood's films) and he gives some scenes a nicely gritty look, but a lot of other scenes just look like a made-for-TV movie. Macklin's relationship with his girlfriend, played by Karen Black, is pointless and has an unpleasantly abusive aspect. The ending is the biggest disappointment. It feels hastily assembled and finishes on a jokey note that is very un-Parker.

The Outfit is worth watching, but I wouldn't go out of my way to track it down.
Posted by Cary Watson at 2:07 PM