Film Review: The Princess of Montpensier (2010) 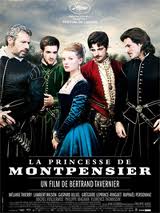 Do people still want to see historical epics like this? I thought this film might offer a bit of a wrinkle on an old and tired genre, but it doesn't. The costumes are gorgeous and detailed, there's romantic and political intrigue, and there's a fair amount of swordplay. The problem is that it all feels tired and paint-by-numbers.

The actors are all good, with Melanie Thierry being quite beautiful in the role of the beautiful Princess Montpensier. In fact, she looks a bit too good. This is the 16th century, after all, but Thierry always looks like she's just finished shooting a shampoo commerical. I never got past the feeling that I was watching actors playing dress-up.

The story is about the arranged marriage of Marie to the Prince de Montpensier. This being a period piece, Marie, naturally enough, doesn't love the Prince, but pines for Henri de Guise, played by Gaspard Ulliel, who looks like he's just back from doing an aftershave commercial. Passions run high, love follows a rocky course, and the Catholic/Protestant wars rage in the background.

Maybe Bertrand Tavernier, the director, felt he needed a costume drama on his resume, but I can't see any other reason to make this film; the plot is generic and even the action elements are lacking in energy. If you want to a fairly recent French costume epic that really delivers the goods watch The Horseman On the Roof with Juliette Binoche.

Email ThisBlogThis!Share to TwitterShare to FacebookShare to Pinterest
Labels: Bertrand Tavernier, Gaspard Ulliel, Juliette Binoche, Melanie Thierry, The Horseman on the Roof, The Princess of Montpensier