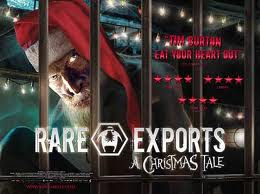 This film began life a few years ago as a short shown on YouTube. The feature version feels like a short that's been stretched waaaay out. The high concept premise is that Santa and his elves are actually malevolent creatures from Finnish folklore who like to kill children. Things begin with a team of engineers digging something big out of a mountain, which turns out to be a giant, horned Santa creature frozen into a block of ice. Meanwhile Santa's elves, apparently alerted to this excavation, start kidnapping local children in preparation for the big guy thawing out and feeling hungry. A young boy named Pietari somehow fathoms all this and attempts to warn his father, but, of course, dad won't listen until things are almost too late.

Half the fun in a horror/fantasy story is the setup, the sense of rising dread or excitement we get as things get creepier, stranger or scarier. Rare Exports does a terrible job of setup. Nothing's explained, the story lurches forward, characters are barely introduced, and the whole folklore aspect of the story is barely described or developed. Really, the director only seems interested in the final 15 minutes of the film wherein we get most of the special effects and some tongue-in-cheek riffs on action movie tropes. If as much imagination and attention to detail had been paid to the rest of the film this would be something to remember.

I'd have more to say about Rare Exports but there's really so little to it. It looks good, the acting is fine, but the storytelling, the nuts and bolts of building up atmosphere, are so clumsily handled that the film ends up feeling like a first draft for a another, better film.