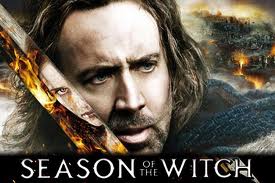 You could do a lot worse than watching this on DVD. Season of the Witch came out for a short and disastrous theatrical run in January of this year, and was harpooned by every critic in the solar system. It's actually pretty good if you accept it as a B-movie that wants to deliver some swordplay and supernatural CGI.

I checked out some of the reviews by nationally known critics (Roger Ebert, PeterTravers) and found it interesting that the same critics who thought Witch was an abomination managed to give Captain America: The First Avenger glowing reviews. I watched Captain earlier this week and found it so lame I didn't even bother to review it. But I will now.

Captain America is barely a movie. At about the halfway point of the film Steve Rogers (Captain America) finds himself in Italy in WW II and hears that his best friend is being held captive by the Germans. He goes to rescue him. He succeeds. The rest of the film is almost entirely an extended montage of Steve kicking Nazi ass. There's no plot, there's no character development, and the action scenes are lifeless. The acting never rises above competent, and none of the characters has any personality.

Witch, on the other hand, has a solid, coherent plot that has Nicholas Cage and Ron Perlman as ex-Crusaders delivering a witch for trial to a monastery. Basically, it's a variation on a quest story. It's the kind of tried and true plot that's worked well in everything from westerns to samurai films. They face various dangers en route and then a nasty surprise awaits them at the monastery. The locations used in Hungary and Austria are atmospheric, and the director gives the action elements a lot of energy. And Cage and Perlman are always watchable.

So why the animosity directed towards it? I think the reason is that it's a straightforward B-movie and not an ironic B-movie like Planet Terror or Hobo With a Shotgun. An unaplogetic B-movie doesn't allow much room for critical comment; you either find it entertaining or you don't. But why did Captain America, which by any standard is a poor movie, get such a polite response? I'd hazard a guess that a lot of critics are closet comic book nerds who somehow feel it's their duty to cheer each new additon to the superhero genre.

Let me be clear about Witch, it's no classic. Some of the actors are forgettable, the CGI isn't the best, and the dialogue isn't going to win any scriptwriting awards. But despite all that the film is a lot of fun. It wants to be imaginative, scary, fast-moving and violent, but without Michael Bay levels of bombast and overkill. and on those terms it succeeds.