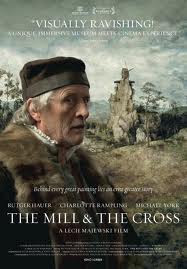 Pieter Bruegel the Elder painted The Procession to Calvary in 1564. It was commissioned by Nicholaes Jonghelinck, a rich merchant from Antwerp. The purpose of the painting, according to this film, was to depict Christ's suffering and crucifixion within the context of the Spanish occupation of the Netherlands.

The above synopsis isn't appreciably leaner than the information supplied in The Mill and the Cross. The film attempts to literally take us inside a painting, to deconstruct and almost atomize its various visual and symbolic elements. Lech Wajeski, the director, shows us how Bruegel took the raw material of daily life and shaped it into a political allegory, and Wajeski does this without turning his film into some kind of dry docudrama.

As befits a story about a painting, The Mill and the Cross is all about images, and Wajeski does a stunning job of making his own images stand comparison to Bruegel's. There's really not a lot more that can said about the film; you either respond to the idea of the film and its images or you don't. It definitely worked for me. The trailer below gives a clear idea of what to expect.

Email ThisBlogThis!Share to TwitterShare to FacebookShare to Pinterest
Labels: Antwerp, Lech Wajewski, Pieter Bruegel the Elder, The Mill and the Cross, The Procession to Calvary

I was a projectionist for over 20 years, and have seen them all.....none are as beautiful as this film. I have studied Bruegel and Bosch for quite awhile, so I knew alot about what little is actually known about these two artists. The writer/director was correct in not trying to explain too much. If you ask ANY artist they will tell you...."what you see/hear is all there is".