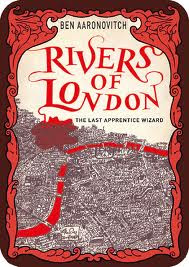 Right now the book world is awash in fantasy literature. This is largely thanks to the twin aftershocks of Harry Potter and the Twilight books. Anything, it seems, with a fantasy or horror element, and any mash-up entangling the two with other genres, gets a warm greeting from the publishing industry. This has produced a lot of dreck, usually involving Buffy clones finding romance as they splatter the undead.

Rivers of London avoids zombies and romance, and is mostly successful, largely thanks to some solid comic writing and a clever mash-up of a police procedural and the world of magic. Our hero is Peter Grant, a young police constable who looks to be headed for a dull, behind-the-scenes job in the Met. All that changes when he's assigned to guard a crime scene involving a headless corpse and then ends up taking a witness statement from a ghost. From there it's a short step to becoming an apprentice wizard under the tutelage of Chief Inspector Thomas Nightingale, who is, yes, a fully-fledged wizard. Nightingale's remit, which is known only to a few of his superiors, is to investigate supernatural crimes and keep the peace on the otherworldly side of London.

The headless corpse is the first in a series of gruesome deaths perpetrated by a vengeful ghost who is using the bodies of Londoners to reenact a bizarre and bloody Punch and Judy show. On top of trying to collar the murderous ghost, Grant and Nightingale have to keep the peace between the gods of London's rivers. London apparently has many rivers, mostly hidden, but each has it's god, and Mother Thames and Father Thames rule over them all.

Aaronovitch has a slick, chirpy writing style that owes a lot to Terry Pratchett, and he's smart enough to have Grant make a couple of references to Harry Potter just so we know that Grant realizes he's dropped into an absurd and improbable world. Aaronovitch also does a good job of explaining, or creating a theory of, how magic works. This is always a bit of a problem in books about magic; the authors either ignore the how and why, or they come up with a dopey, New Age-y explanation. Aaronovitch takes a more technical approach, and it works rather well. Even better is his decision to make the cop elements as real as possible. Take away the magical element and this would be a solid police procedural mystery; Grant talks like a cop, he follows Met protocol, he relies as much on police equipment as he does on magic, and he really seems to enjoy being a policeman.

Where Aaronovitch runs into trouble is with the plot. The final section of the book is a bit of a mess. The first problem is that the author begins to tie himself into thick, confusing knots explaining the magical and supernatural logic behind what's happening. Another bad decision is to have a climactic scene set in a packed Royal Opera House in which the killer ghost reveals himself and a massive riot breaks out. The problem is that this isn't the finale of the book. The riot ends, the reader's excitement evaporates, and the real end comes a short time later. The opera house scene is very Pratchettesque, but Sir Terry would have ended the novel right there.

Notice something? I haven't mentioned the river gods when discussing the killer ghost plot. That's because Aaronovitch fails to make the two plots intertwine in any meaningful way. That would be fine if the river gods' story was a sub-plot, but it isn't. A big chunk of the novel is devoted to dealing with the various gods and, while all of it is interesting and clever, it really doesn't have a damn thing to do with the main plot. The river gods need their own novel, not a superfluous role in a ghostly murder mystery.

There's a sequel to Rivers of London called Moon Over Soho (werewolves, I expect), and yet another is in the pipeline. I'll definitely read the next one and hope that the author has let an editor get a look at it first.
Posted by Cary Watson at 11:38 PM