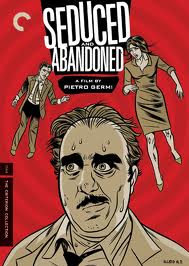 This film is remarkably similar in theme to the novel Bell' Antonio, which I reviewed in August. Both are about the corrosive effects of Sicilian codes of honour and machismo. The novel takes a look at an arranged marriage that falls apart, while Seduced, made in 1964, is about various frustrated attempts to arrange a marriage.

Seduced begins during a siesta in the affluent Ascalone household. Everyone's asleep except Peppino Califano, who's engaged to Matilde Ascalone, and Agnese, Don Vincenzo Ascalone's youngest (15) and most beautiful daughter. Peppino and Agnese steal away to a deserted corner of the large house and the deed is done. It's not clear if they love or even like each other, but they definitely succumb to a mutual lust, with Peppino leading the charge.

Sure enough, Agnese is left pregnant by her one tryst with Peppino and that begins a comic war between Vincenzo and the Califano family. Vincenzo wants Peppino to marry Agnese to save his family's honour. Peppino counters that he doesn't want to marry a girl who can be seduced so easily; it clearly means she's a whore at heart. The battle takes some twists and turns, and in the end the Califanos find themselves being forced to beg Vincenzo for his daughter. And along the way there's been an attempted honour killing and what can only be called a ritual kidnapping. A wedding finally takes place, but it's left nothing but scorched earth behind it and no future prospects for happiness.

This film is described as a comedy, but only in the sense that it's a ruthless satire of Sicilian culture. There are some laughs, but what's to be enjoyed here is the meticulous examination of the hypocrisy and idiocy of Sicilian concepts of honor and pride. None of the characters come away looking good or innocent, and the final shot in the film is a brutal but effective commentary on the pointlessness of upholding honour. Pietro Germi was the director, and he did an excellent job of keeping a nice balance between acidic satire and silliness.

The cast is excellent, led by Saro Urzi as Vincenzo. You may recognize him from The Godfather where he played the father of the Sicilian girl Michael Corleone takes as his wife. Choosing Urzi for this role was clearly a tip of the hat to Seduced and Abandoned from Francis Ford Coppola. The cinematography is also good, and the soundtrack by Carlo Rustichelli sounds remarkably like something Ennio Morricone might have created. I wonder who influenced who.

Sicilian codes of honour don't have much contemporary resonance, but the film can still be enjoyed for the sheer craft and pleasure and wit that went into making it. There's a film version of Bell' Antonio and I'm going to have to hunt it down to compare and contrast.
Posted by Cary Watson at 12:51 AM