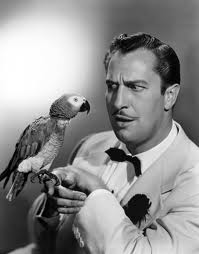 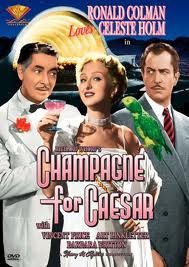 This comedy is interesting for a couple of reasons. The first is that it was one of Hollywood's first films about the growing popularity and power of TV. The Milady soap company is the sponsor of a TV quiz show that gives contestants the chance to keep doubling their money, starting at $5, just by answering questions in their declared field of expertise. If they get a question wrong they lose everything. It's a lame but popular show until one Beauregard Bottomly (Ronald Colman), a snob and polymath, decides to put the show off the air by refusing to bow out after winning a respectable amount of money. Bottomly wants to own the company.  The owner of Milady, Burnbridge Waters (Vincent Price), cancels the show, but slumping sales force him to put Bottomly back on the air even as he's poised to win $40m and the whole company.

Champagne clearly sides with Bottomly's view that TV marks the decline of Western civilization. The host of the quiz show is a bantering idiot played by Art Linkletter, and Vincent Price's Waters character is a crazed capitalist with the emphasis on crazed. What the film gets dead right is that the viewing public can become transfixed and emotionally-committed to utterly trivial individuals as long as they're on TV.

That Champagne succeeds as a comedy is largely thanks to Vincent Price. After seeing his performance you really have to wonder if he wasn't wasted in horror movies. Price acts the buffoon better than he ever acted the villain. Balancing out Price's performance in a negative sense is Art Linkletter, who really was a radio and TV celebrity of the kind being mocked. Linkletter clearly knows nothing about acting and his line readings are so off the mark you'd almost think English was his second language. The rest of cast is good, and the script has more than its share of good comic moments, but it's Vincent Price who makes this film worth watching.
Posted by Cary Watson at 11:53 PM