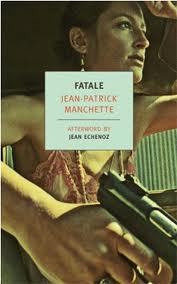 When reviewing a crime novel it's normally pretty easy to come up with a comparable author or book. Not in this case. Fatale is blunt, brief and brutal; its style brings to mind comics or graphic novels, or a particularly vicious B-movie. That's not to say it's junky or pulpy; this is a proper novel, with crisp, direct prose and a mandate to put the boots to the French upper middle-class.

The central character is Aimee, an attractive woman who travels from town to town infiltrating the local upper crust and then blackmails them once she's found out their dirty secrets. Oh, and she also usually murders her victims after she's got the cash. Aimee arrives in Bleville, a coastal town in northern France, and soon finds that there's no shortage of victims for her blackmail scheme. The denouement finds Aimee facing off against a gang of Bleville's notables. The body count is very high.

A synopsis of the plot can make this novel sound ludicrous and sensational, but that's clearly not what Manchette was striving for. Fatale is almost a schematic of how the upper bourgeoisie acts and reacts to threats and temptations. Aimee is partly an avenging angel and partly a victim of bourgeois culture. She, like a good capitalist, sees society purely in terms of its utility to her: what parts of it can be used to her profit, what parts can be eliminated because they hinder her. In short, Aimee's motivating philosophy would seem to be exploit others before they exploit you.

Fatale is definitely not going to be everyone's cup of tea. It's bleak and cruel, and the tone of the writing is dry and sometimes startlingly matter-of-fact. Machette wrote a handful of other novels but not many of them seem to be available in English.
Posted by Cary Watson at 3:00 PM