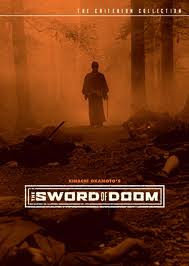 There are many aspects of samurai films that I love but one of my favourites is what I call the Stop, Drop and Die move. This occurs when a master samurai slashes his sword at several assailants and they immediately freeze in a standing position, often with their swords still upraised. This is the Stop portion of the move. We know they've been hit, they know they've been hit, but for a few seconds nothing happens. Now comes the Drop. The assailants slowly topple over or crumple to the ground. There's a certain elegance to this maneuver. You can't just drop to the ground and bounce like some cheap gangster, you have to go down like a neatly felled piece of bamboo. It's very zen. Finally, the Die. Once on the ground the samurai's victim is allowed one limb twitch or a muted groan. No histrionics, please.

I don't know what the Stop, Drop and Die signifies in Japanese culture, but there are lots of examples of it in The Sword of Doom, one of the best of the classic samurai films. The plot...do I have to? Is it really necessary? Oh, well, I'll try. Ryunosuke is a psycho samurai with a perpetual, spooky, thousand yard stare. Why is he like this? We aren't told. He murders a pilgrim for no reason at the beginning of the film, then follows that up by killing a samurai from another clan at what is supposed to be a non-lethal tournament. He then becomes a ronin and falls in with a gang working to support the shogunate. Toshiro Mifune is also around as a fencing master who intimidates Ryunosuke.

The plot borders on the opaque but the action elements and cinematography more than make up for it. This is one of best-looking samurai films ever. The highlight is an attack on the Toshiro Mifune character at night during a snowstorm. Even if there wasn't swordplay involved this would be a ravishing scene to look at, made even better by the fact that the film is in black and white. Snow scenes are made for black and white. Almost as good is the sequence in which Ryunosuke is attacked on a foggy road by rival clansmen. The final sequence is a triumph of art direction and fight choreography. Ryunosuke is in a tavern/brothel with his gang when he suddenly comprehends how evil his life has been. He's suddenly haunted by the shadows of the innocent people he's killed and in a demonic rage he begins slashing the walls apart. At this moment the gang moves in to assassinate Ryunosuke and thus begins a seven minute sequence of non-stop swordplay and Stop, Drop and Die. The film ends on a freeze frame of Ryunosuke still slashing and hacking. I thought this ending was a bit odd until I read that The Sword of Doom was supposed to be the first film in a trilogy, which, unfortunately, never came to pass.


If you're a casual fan of samurai films the wonky plot might be an annoyance, but if you're a hardcore samurai fan then the classic pleasures of the samurai film are here in abundance. A recent samurai film that's almost as good is 13 Assassins, which I reviewed here. Like Doom, it features a bad guy who's pure evil to the tips of his fingers. The trailer below was put together by a fan, but it's pretty good if you can ignore the music.