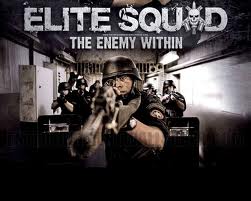 Hollywood used to make tough, nasty cop films (for more on this see my review of  The Seven-Ups), but that genre seems to have been surrendered to other countries. Hong Kong produces some good ones, although they often suffer from the John Woo, let's-kill-100-gangsters-without-reloading factor. Two of the best that I've seen in recent years are from Brazil: Elite Squad (2007) and the sequel, Elite Squad: The Enemy Within.

The first film was the about the formation of BOPE (standing for Special Police Operations Battalion, an actual police unit), a paramilitary group of police officers charged with combating crime in Rio's favelas. The first film was a no-nonsense, let's-put-a-special-team-together-and-fight-bad-guys story. We see how bad the situation in Rio is off the top, then we get the selection and training sequence, and then we see the team kicking ass. Elite Squad wasn't flashy or groundbreaking, just violent and ruthlessly efficient, but its right-wing tone seemed more appropriate for a Chuck Norris movie.

This sequel seems to be making amends for the political stance of the original. As the title indicates, this time the enemy isn't drug dealers, it's the cops and the local politicians. Local police units in Rio are taking over whole favelas and taxing every kind of commercial activity, up to and including internet service. They then use some of that loot to buy off the politicians who control or oversee the police. The good guy in all this is Col. Nascimento, the head of BOPE. He's kicked upstairs to keep him out of the way, but, of course, he can't stay behind a desk when there's trouble on the streets. His problems are complicated by an ex-wife and estranged son who don't like his politics.

The Enemy Within doesn't reinvent the cop movie wheel, but it delivers a solid storyline and lots of tough, nasty action. Seeing the first film would be an advantage in order to understand a lot of the backstory of the central characters, and I have a feeling that some knowledge of Brazilian politics would also be an advantage. Both these films are a reminder that Hollywood doesn't have a monopoly on polished, hard-hitting action films. The only real difference between these films and their Hollywood equivalents is the tens of millions of dollars paid out by the big studios for stars and ad campaigns.

Email ThisBlogThis!Share to TwitterShare to FacebookShare to Pinterest
Labels: BOPE, Brazil, Elite Squad, Elite Squad: The Enemy WIthin, The Seven-Ups