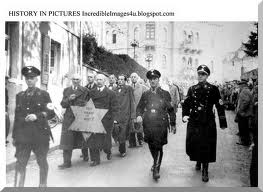 I reviewed the first volume in this trilogy here, and the second is just as gripping and informative. Volume two is chiefly remarkable for the way it answers the question of how and why the average German was able to go along with Hitler's bloodthirsty nationalism and antisemitism. Evans also manages to dispel the myth that the Nazi Party was somehow able to lift Germany out of the Depression.

After WW II historians and sociologists spent a lot of time arguing about and commenting on the fact that Germany, in many respects one of the most civilized European countries prior to WW I, was able to become the most uncivilized in double-quick time. Evans shows that the economic battering and civil unrest that plagued Germany throughout the 1920s essentially created a punch drunk populace that was softened up for Hitler's message: the imminent return of a Germany both powerful and proud. His rabid nationalism also seemed like a strong antidote to the threat (as perceived by the middle and upper classes) of Marxism. Once in power, Hitler and the Nazis began the quick, brutal and ruthless suppression of all forms of dissent. Everyone from trade unionists to Catholics to boy scouts were bullied, jailed, exiled or killed in an effort to create a Nazi-centric state. Given the very high levels of intimidation the Nazis dealt out it becomes less surprising that the German people were reluctant to voice opposition to Hitler. That being said, Evans leaves us in no doubt that after 1933 most Germans were, to a point, supporters of Hitler. However, few of them could have anticipated how great his desire was for conquest and bloodshed.

Evans doesn't delve much into the psychological and sociological reasons for antisemitism, but he shows us that Germany was far from alone in persecuting Jews. Throughout the '30s countries like Poland, Hungary and Romania enacted antisemitic legislation and regulations that often equaled what the Nazis were up to. For all the usual religious and scapegoat reasons, the '30s saw a huge rise in antisemitism across Europe. Where Germany differed was in the enormous propaganda effort the Nazis put into demonizing Jews. Books, movies, radio, newspapers, speeches, there was no form of communication the Nazis didn't use, and use often, to persuade Germans that Jews were a curse upon the land. Evans shows that even Germans who had no particular dislike for Jews prior to 1933 became enthusiastic antisemites after only a few years of non-stop Nazi propaganda.

Popular opinion has often said that Hitler and the Nazis managed to turn the German economy around after they came to power. Not so. The Nazis reduced employment to a large degree by redefining who qualified as unemployed. Seasonal workers, for example, were no longer listed as unemployed when their jobs ended. Germany also began to simply print more money in order to pay for rearmament and public works projects. By 1939 the Germany economy was, in fact, nearing collapse; rationing was becoming commonplace and the consumer economy was disappearing. The Nazis needed a war in 1939 if only to prevent economic disaster. Their economy seemed vibrant but was, in reality, grossly deformed.

If the third volume in this series is as good as the first two it will arguably have to stand as the best history of Germany and the Nazis that's been written.
Posted by Cary Watson at 2:12 PM