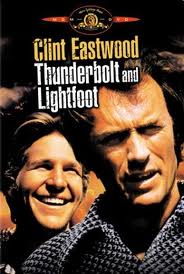 In 1974 I was 17 and only one year away from being legally eligible to see the R-rated Thunderbolt and Lightfoot in the theatre. It was a film I wanted to see very badly because it offered the combination of Clint Eastwood, violence and female nudity. My peers and I all tried to get in to see it, and we all failed. Theatres in Winnipeg took R-ratings very seriously. I finally saw it maybe 5 or 6 years later and thought it was pretty damn cool, just what I was hoping for.

I saw it again this past week and have to revise my opinion somewhat. While in most respects it remains a typical example of 1970s action movies, there are some odd angles to it that are worth a second look. The first is the bromance between Clint Eastwood (Thunderbolt) and the much younger Jeff Bridges (Lightfoot). In 1974 bromance was a term that was twenty years away from being invented, but the relationship between the two leads in this film has to be the template for all the movie bromances that followed. The duo meet cute (in action movie terms), do some bonding over beers and bimbos, and then consummate their relationship with a bank robbery in Montana. What's a bit different about this bromance is that Thunderbolt and Lightfoot are so visibly taken with each other. They do everything but exchange friendship rings. There isn't quite a homoerotic vibe to their relationship, but their enthusiasm for each other is a bit odd for the standards of the '70s. Of course, this bromance shouldn't really be a surprise given that the film was written and directed by Michael Cimino. Cimino later did The Deer Hunter, the grand opera of bromances.

Thunderbolt meets the '70s quota for gratuituous female nudity, but it does so with a leering, hairy-palmed awkwardness that makes it feel like Cimino might have penned the script when he was sixteen. What's odder is that sometimes the standard male heterosexual lustfulness spills over into something gayer. In once scene a brutish character played by George Kennedy insists that Lightfoot describe a naked woman he saw that day. Lightfoot teases him with the description and then gives him a mock kiss a la something Bugs Bunny would do to Elmer Fudd. Also, as part of the heist Lightfoot has to dress in drag and attract the sexual attention of a clerk. Another scene has a minor character telling Thunderbolt about a prank he pulled involving sticking his dick in another man's hand. Sometimes you have to wonder what audience Cimino thought he was writing for. And I won't even mention the plentiful use of phallic symbols.

The last major oddity is the ending, which turns what has been a nasty, rude, tough, fun heist film into something sadder and more serious. The heist, as is often the case in films like this, goes badly awry. George Kennedy double-crosses Thunderbolt and Lightfoot, knocking them both out in the process, and putting Lightfoot down with a particularly vicious kick to the head. Kennedy meets a grisly end shortly thereafter and T & L escape. The next day our two penniless heroes are thumbing a ride and come upon $500,000 stashed from a previous robbery of the same bank (it all makes sense in the context of the story) inside a one-room schoolhouse now being used as museum. This looks like a happy ending, but the kick Lightfoot took has caused serious brain damage, and in the last 6 or 7 minutes of the film we see him go from dazed to dopey to partially paralyzed to dead. It's a shocking and bleak twist to the end and it seems to be an oblique commentary on Vietnam. The Thunderbolt character is described at several points as a Korean War hero, and one of the last things Lightfoot says before he dies is that he now feels like a hero because he's finally accomplished something: he pulled off his role in the robbery. Like the Vietnam War, Thunderbolt ends with nothing really accomplished and a dead young man.

Thunderbolt is mostly well-made, with some nice cinematography, brisk action sequences and a scene-stealing performance from Jeff Bridges in one of his earliest roles.The plot has one or two holes, but otherwise Thunderbolt is an entertaining crime flick, albeit one that's a bit odd and pervy, but that only makes it more interesting.

A very perceptive review of one of my favorite films. Thanks!

Never watch this film if you have a headache. It's terrifying towards the end.