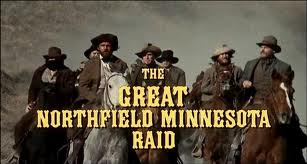 By 1972 the western, as a film genre, was in palliative care, done in by a deficit of original ideas and by the public's growing taste for cop and disaster movies. European directors like Sergio Leone had taken westerns as far as they could go in terms of epic scope and allegory, while Hollywood countered with a stream of gritty, realistic westerns, the so-called revisionist westerns. Titles that fall under the latter category include Will Penny, Little Big Man, Soldier Blue, Bad Company, and, to a lesser degree, The Wild Bunch. The hallmark of the revisionist western is the debunking of the heroic, American expansionist ideal of John Wayne westerns. Revisionist westerns are sympathetic to Indians, show cowboys as skanky and feral, and present settlers and townspeople as racist and greedy.

The Great Northfield Minnesota Raid is firmly in the revisionist camp. The writer and director was Philip Kaufman, who'd go on to greater fame with Invasion of the Body Snatchers and The Right Stuff. The title raid was the last bank robbery of the James-Younger gang, but Kaufman's focus isn't so much on the robbery as it is on more contemporary issues. In 1972 the U.S. was still waist deep in the Vietnam War and its inner cities were becoming war zones. In Raid, Kaufman offers up a thesis that America's taste for violence has deep roots. The gang and the townspeople of Northfield are shown to be equally callous and bloodthirsty. Jesse James murders a kindly old woman just to acquire her clothes for a disguise, and after a posse of Northfield citizens accidentally gets in a firefight with a posse from another town they take pride in having inflicted casualties on the other posse. The philosophy of the film is summed up beautifully during a baseball game that's half brawl, half sporting event. One of Northfield's leading citizens tells Cole Younger that baseball is now America's national sport, and Cole politely corrects him by saying, "Shooting is America's national sport and always will be." Cole then blasts the baseball out of the air, immediately ending the game.

Raid has an appropriately gritty, dirty look, and the gang members range from sociopathic to feeble-minded. Jesse James (Robert Duvall) is presented as a scheming psychopath who has a bottomless hatred for Northerners. Cole Younger (Cliff Robertson) is the brains of the gang, and has, despite his hardcore criminality, a very American innocence and delight when exposed to new sights and marvels. The acting is excellent throughout. It's no surprise that Duvall is good, but Robertson's acting is a bit of surprise. Robertson was always the bland utility infielder of leading men, but here he gives a charming, eccentric performance that's a perfect counterpoint to Duvall's homicidal Jesse James. The film's main drawback is a series of cutaways to a railway car full of Pinkerton men who've been hired to hunt down James and Younger. These scenes are badly shot and turn out to be irrelvant to the plot. I was going to attach Raid's trailer to this review, but it's absolutely stuffed with spoilers. Instead, here's a still from the film showing the aftermath of the raid. 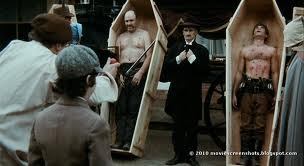