Book Review: Eye of the Cricket (1998) by James Sallis 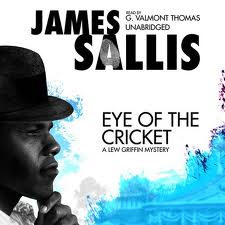 This is the first I've heard of James Sallis, although it turns out the film Drive (my review's here) was based on his novel of the same name. And he's written a sequel called, naturally enough, Driven. I'm guessing the third in the series will be called Driving. Anyway, Cricket is one of seven novels Sallis has written featuring private detective Lew Griffin. Griffin is black, a resident of New Orleans, and in this novel a part-time university prof teaching modern literature and French. Reading between the lines it would seem that Griffin was once more of a full-time private dectective.

Cricket presents the problem of the crime writer who doesn't appear to be all that interested in writing about crime. In this novel Griffin investigates a couple of missing persons cases in a laidback sort of way that involves a lot of eating and drinking in colourful New Orleans eateries while asking questions of obligingly talkative friends and acquaintances. In this way we get an engaging tour of the city, but there isn't really any detection going on. And the final 40 or so pages have Griffin living on the street in order to find his son who disappeared in New York several years previously. The missing son portion the story is poorly developed and makes for a limp, saccharine finale.

Sallis isn't the first crime writer to lose interest in crime. Michael Dibdin's series of mysteries featuring Comissario Aurelio Zen eventually became mood pieces with a bit of crime on the side. American mystery writer K.C. Constantine hit the wall after nine books about Mario Balzic, the Chief of Police of Rocksburg, PA. He rejuvenated himself by retiring Balzic and writing about his replacement, but before that happened his last two Balzic novels were nothing more than extended rants about life in America under Ronald Reagan.

Sallis' focus in this novel is on Griffin coping with middle age and dealing with the demons of his past. Sallis is a good writer, sometimes a fine writer with a Faulknerian way with words, but his ability to craft prose can't disguise the fact that he isn't really interested in telling a story. Another sign that Sallis is more interested in creating a literary novel is that he has Griffin quoting and referencing famous authors at a furious clip. That kind of thing is never a good idea; it always seems to be a substitute for storytelling. I can't recommend this book, but I'm curious to see if Sallis is a more disciplined writer in Drive and the earlier Griffin novels.
Posted by Cary Watson at 10:54 PM