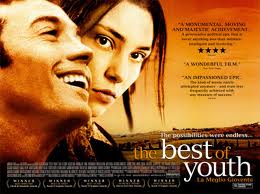 It says something about the state of Italian TV that this film, which was originally made for RAI (the Italian state broadcaster), was supposedly turned down by them once they'd seen the finished product because it was too good for TV. I guess in the age of Berlusconi a TV show without veline (the name for the leggy, half-naked women who adorn Italian TV shows) is unthinkable. Youth is a six-hour mini-series that follows the members of the Carati family from 1966 to 2003, and it has to rate as one of the best Italian films ever. Because of its running time it was only ever shown at various festivals (winning a ton of awards) and in limited theatrical release so its global exposure has been pretty minimal.

The film focuses on the Carati brothers, Nicola and Matteo, who are in university in Rome when we first meet them in 1966. Both are excellent students but it's made clear from the outset that Matteo, who has a fiery, brooding personality, is the genius of the family. It turns out he's something of a troubled genius, as he purposely flunks his final exams in a fit of pique. Nicola is the more grounded, humane brother who has a dogged patience and a desire to change things for the better. As the story moves from 1966 to 2003 key moments in recent Italian history play out in the foreground and background, sometimes directly affecting the two brothers. Nicola meets his wife during the cleanup after the devastating floods of Florence in 1968, and his sister Giovanna is a judge during the landmark anti-mafia trials of the 1980s.

Although Italian history plays a big part in Youth the story is as much about personalities and personal choices as it is events and issues. Life decisions, and the motivations for them, are really what's at the core of the story. All of the major characters are faced with important choices that often have their roots in some of the tectonic shifts that took place in Italian society. It's appropriate that Nicola, a psychiatrist, becomes the central character as he tries to understand and influence the important people in his life, chiefly his wife, Giulia, and Matteo. To a certain degree these last two characters are stand-ins for the more toxic and troublesome strands in the fabric of Italian society. Fortuantely, the script does not make them entirely symbols; these are very real people whose actions and motivations are wholly believable, even if, like Nicola, we can never fully understand what has made them into the people they are.

One of the greatest strengths of Youth is that it's able to deliver tremendous emotional highs and lows that don't resort to melodrama or artifice. The Caratis face their share of tragedy and happiness, but none of it feels artificial. Because of this the film packs an amazing emotional punch. These characters are so real we laugh and cry with them to a degree that's very rare to find in a film. In that sense Youth feels more like a beautifully realized novel than a mini-series. The emotional strength of the film owes a lot to the actors, especially Luigi Lo Cascio as Nicola and Alessio Boni as Matteo. Lo Cascio's role is particularly demanding since he has to make a man who's humane, diligent and responsible also come across as entertaining and engaging.

The Best of Youth should almost be judged against novels rather than other films. It has a great novel's psychological acuity and epic sweep, and a careful, detailed focus on its main characters. Director Marco Tullio Giordana deserves abundant praise for orchestrating all the different elements in the film. Although it was originally intended for TV, Youth is also a very good-looking film, with great location work and a soundtrack that neatly mixes a lush original score with period pop songs. One warning: you'll need to keep a box of Kleenex handy.