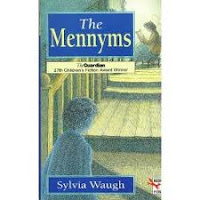 Working at the library has shown me that adult readers are generally reluctant to move outside their preferred genre; mystery readers read only mysteries, romance readers read only romances, and so on. Sometimes they'll make an exception for a high-profile author like Stephen King or a notable bestseller like The Help, but generally most readers stay in their groove. The one genre they rarely make an exception for is kids' lit. Yes, a lot of adults read Harry Potter, but I think that's the exception that proves the rule. And that's a pity because some of the smartest, most imaginative writing can be found in the kids section.

The Mennyms is a perfect example of first-rate writing that should be allowed a place at the grownups' table. I'll admit that the basic story idea of The Mennyms sounds painfully cute, whimsical and juvenile: the Mennyms are an extended  family of life-size rag dolls who have, for some mysterious reason, come alive. Through a complicated, but believable, series of subterfuges and stratagems the Mennyms have managed to keep their peculiar existence a secret. They live in a house in a middle-class London suburb that was once owned by their deceased maker, and behind perpetually drawn curtains they try and live their lives as though they were fully human. The Mennyms are completely aware that they aren't human, but engage in meals and so on (what they call "pretends") that fill their day.

On one level the novel is about the Mennyms' attempts to live their lives without being discovered. On another level it's about what constitutes a family, and how various domestic rituals and traditions help bind a family together. And on yet another level it's about the Big Questions: why are we here? Why do we exist? What defines existence? Although the Mennyms are dolls, they all have very human, very real personalities. They're very ordinary, very middle-class "people", but Waugh is such an acute and sensitive writer (she's won a ton of kids' lit awards) that you very soon forget that these characters aren't human. If Barbara Pym or Graham Greene had decided to take a stab at writing for kids or young adults they might have come up with something like this.

The Mennyms is the first in a series of five novels, all of which deal in one way or another with the Mennyms trying to avoid exposure and find out how they came to be. There are moments in this series that are unbearably tense and others that are heartbreaking, so much so that I wonder if kids will be able to deal with them. The last novel of the five isn't as strong as one might hope, but overall this series has to rate as a classic of children's literature.
Posted by Cary Watson at 10:15 PM