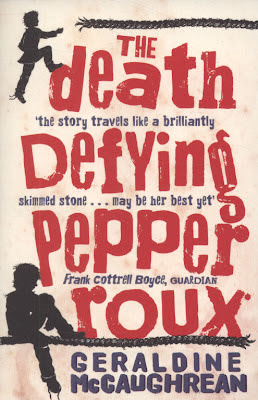 Finding this book shelved in the teen section is a bit like having Anna Karenina stuck in with the Harlequin romances, or Metamorphosis kept in sci-fi/fantasy. This isn't just a great teen novel, it's a great novel. In fact, I'd guess that the publisher probably hurt sales by not marketing it as another Life of Pi. It should have been sold as an adult novel with a teen protagonist rather than as a young adult novel.

Pepper Roux is a 14 year-old boy living in a French coastal town. The time period is the early 1900s, but that's only a guess, and the era isn't too terribly important to the story. Pepper's family consists of a mother, father and aunt. Aunt Mireille is a religious fanatic who, on the day of Pepper's birth, claimed that St. Constance appeared to her in a vision and said that Pepper would die on his fourteenth birthday. Pepper's parents are under Mireille's thumb, or at least believe totally in her prophecy. Pepper has grown up certain in the knowledge that he will die on his fourteenth birthday. His whole life has been a preparation for his terminal day. The terrible day arrives and Pepper decides to run away from his fate. What follows is a novel with a structure that's part odyssey, part picaresque, but unlike most picaresque novels the main character is neither a rogue or a rascal, although Pepper does, in all innocence, commit some rascalish acts. It's hard to outline the plot without making the story sound overly whimsical, but Pepper becomes, by turn, a sea captain, a reporter, a meat cutter, a French Legionnaire, a horse wrangler, a telegraph boy, and a husband, all in an effort to disguise himself and thus hide from St. Constance's wrath. Along the way, as is the case with a picaresque novel, Pepper learns much about the human character, both it's nobility and its cruelty.

The general tone of Roux is light and humorous, but there are darker elements, particularly the anguish Pepper goes through as he tries to live with the constant fear of God coming down to snatch him up. The quality of the writing, McCaughrean's ability to craft striking sentences, metaphors and similies is what's most astonishing about this novel. I can't think of another recent novel I've read that shows more agility and  joie de vivre with the English language. Equally good is her skill at alternating dark and whimsical elements. Not getting the balance right can really ruin a novel, but McCaughrean manages it flawlessly. The best example is her handling of Yvette, an abused woman who  Pepper becomes a "husband" to. Yvette is nearly mute but the author makes her very real, and her pain is truly affecting but not so much so that it makes the novel uncomfortably serious.

I actually wouldn't recommend this book to teens unless they're up for a highly unconventional plot structure and an equally odd main character. This novel doesn't fit easily into most teen fiction genres. It has aburd, surreal moments but it's not a fantasy, nor is it about garden variety teen problems. Really, the novel it most closely resembles is Candide or perhaps The Adventures of Huckleberry Finn. So far, it's the best novel I've read this year.
Posted by Cary Watson at 10:02 PM