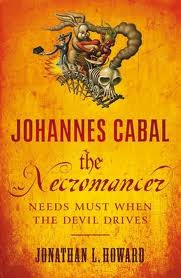 Terry Pratchett isn't, unfortunately, going to be writing forever, but Jonathan L. Howard may well be his worthy successor. This is the second Johannes Cabal novel I've read (review here) and it's clear he's more than a one-hit wonder. There are fantasy writers who can come up with imaginative, well-plotted stories, and others who can write comedy, but it's really only Pratchett who's been able to combine the two. Jasper Fforde and Robert Rankin have tried to follow in Pratchett's footsteps, but they just feel like very pale imitations. Howard is the real deal. The key to his success is that he creates solid plots that work as an excellent framework for some very good comedy writing.

In his debut appearance Cabal journeys to Hell to strike a deal with Satan for the return of his soul, which he previously sold for assistance in learning the science of necromancy. Satan tells Cabal he can have his soul back if he provides him with 100 souls as compensation. Cabal agrees to the deal, and Satan lends him a supernatural traveling carnival as a means of ensnaring human souls. Cabal has one year in which to acquire 100 signed contracts from people who are willing to give up their souls to Satan in return for earthly power and delights.

The carnival and the deal with the Devil are handy plot devices for Howard to construct a string of supernatural and comedic set pieces around. With a lesser writer this plot structure might have felt clunky, but Howard gives his story a nice flow, smartly alternating scenes that are spooky with ones that are comic. No two stops the carnival makes play out the same way, and it serves one of Howard's strengths as a writer. In Johannes Cabal the Detective the novel ends with an epilogue that also works as an excellent standalone horror short story. In Necromancer Howard's ability as a short story writer comes in very handy as each stop the carnival makes creates an opportunity for a separate story. Not every stage on the journey has a short story attached, but when Howard does turns his hand to one the results are excellent. The standout in this regard is a chapter that's both a neatly constructed story with a sting in its tale, and also a pitch-perfect homage to the Nigel Molesworth books by Geoffrey Willans.

Having read two of the Cabal books it's clear that Howard is also very good at writing about the supernatural. In Detective he tried his hand at Lovecraftian horror, and in Necromancer he gives us a more traditional ghost story that comes from the M.R. James school. The humour, both in tone and style, is what's most Pratchett-like about Howard. In fact, Pratchett's Discworld novel Eric seems to have inspired the opening section of Necromancer. The only minor drawback to the Cabal novels is Cabal himself. He's Blackadder in necromancer's clothing, and while that works well for comic purposes, after a certain point his constant, and sometimes cruel, self-centredness becomes a bit tiresome. There needs to be more variety in his character. And here's one last quibble: Howard needs to decide what time period the Cabal stories are set in. This one seems to be set in the 1930s, but the next, Detective, feels like it's set in the Edwardian era.
Posted by Cary Watson at 11:15 PM