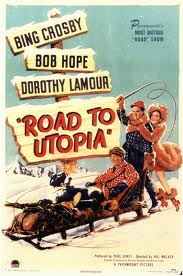 If you're at all familiar with the Road movies starring Bob Hope and Bing Crosby you'll be happy to know that this one offers more of the same silliness, songs, and comic one-upmanship. It's the fourth of the Road movies, and I wouldn't bother to review it but one thing about it makes it stand out: Utopia must set some kind of record for breaking the fourth wall. The concept of breaking the fourth wall (the imaginary wall between the audience and actors that allows for the audience's suspension of disbelief) had been around before this, and previous Road movies had indulged in it, but Road to Utopia omits the fourth wall almost entirely.

Things begin with Robert Benchley, a star of comedy shorts, introducing the film. He also pops into the corner of the frame in various scenes, commenting on the action and at one point mentioning that what we're seeing is a dissolve. Amongst other fourth wall breakdowns we get an extra in evening dress wandering through a ship's engine room who's asked by Bob and Bing if he's in the movie. He tells them he's just taking a shortcut to Stage Ten. When the music strikes up for one Dorothy Lamour's songs, Bob does a double-take looking for the source of the music, and at one point an Alaskan mountain becomes the Paramount logo. In fact, it would easier to list the moments in the film that don't break the fourth wall.

Road to Utopia is quite enjoyable, not as dated as you might think, and if you're an ironclad film nerd you need to see it to say that you've seen one of the finest examples of cinematic metafiction.