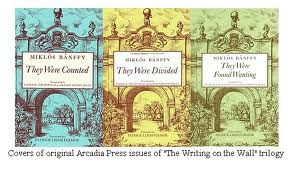 So, does your country have a national literary epic? Something that captures the entire breadth of a society at a time of crisis over a period of several years or more? War and Peace is the obvious example, but then the Russians sometimes  seem to have written nothing but national epics: there's Life and Fate by Vasily Grossman, The Brothers Karamazov by Dostoevsky, And Quiet Flows the Don by Sholokhov, and August 1914 by Solzhenitsyn. French writers took a more scientific, incremental approach, x-raying their nation in novel series such as La Comedie Humaine by Balzac and Les Rougon-Macquart novels by Zola. Dickens and Trollope took the same approach for Britain. But what of the rest of the world? India has The Peacock Throne by Sujit Saraf; Sri Lanka's epic is The Sweet and Simple Kind by Yasmine Gooneratne; The Cairo Trilogy for Egypt by Naguid Mahfouz; Syria`s The Dark Side of Love by Rafik Schami; and Italy`s Il Gattopardo by Lampedusa. An aside: despite it's size, diversity and rich history, the US has never produced a national epic. The U.S.A trilogy by John Dos Passos is an experimental (for the 1930s) attempt at an epic, but it doesn't quite come off. It's probably the size and diversity factor of America that's stopped writers from taking a shot at a single epic novel, but that doesn't explain why no author has tried to go the Balzac route and write a series of novels about the country.

And so my point is that most nations with any kind of strong literary tradtion have produced a national liteary epic or two (come on, USA, you can do it!). One of the best I've read recently is The Transylvanian Trilogy by Count Miklos Banffy, which consists of They Were Counted, They Were Found Wanting, and They Were Divided. The trilogy was produced from 1934-40 and it's the national epic of both Romania and Hungary. Why both? Because Banffy was a proud Romanian with a huge ancestral estate in Transylvania, but he was also a politician in the Austro-Hungarian empire and after WW I he became Hungary's Foreign Minister. In short, Banffy could easily have been in a character in the national epic he wrote.


The central character in the trilogy is Count Balint Abady, and we follow his story through the ten years leading up to the outbreak of WW I. Abady is a voice of reason in the Austro-Hungarian government as the empire dithers and bickers its way into the dustbin of history. But politics is only one facet in this vastly entertaining trilogy. Banffy is a great storyteller, and he stuffs the novels with colourful, vibrant characters. There are frustrated, doomed lovers, dissolute aristos, scheming estate overseerers, gypsies, a barking mad count, and a couple of dozen other memorable characters. Add in duels, hunts, balls and sundry intrigues and you have 1,500 or so pages of addictive reading. Banffy wants to tell the often bitter truth about the world he knew and he wants to do it in the most vivacious way possible.


After WW II, Banffy, like a character in a tragic novel, ended up reduced to a landless nobody with a meaningless title in communist Hungary. He died in 1950 and his novels only became available in English relatively recently. The only drawback to the books are the titles. The individual novels sound like accounting texts, and putting Transylvania in the title of anything leads to thoughts of a very different kind of count. If you have a longish vacation coming up, or if you want to add a check mark to your bucket list of national literary epics, get online with Amazon now.
Posted by Cary Watson at 12:27 AM

Email ThisBlogThis!Share to TwitterShare to FacebookShare to Pinterest
Labels: Austro-Hungarian Empire, Miklos Banffy, national literary epic, The Transylvanian Trilogy, They Were Counted, They Were Divided, They Were Found Wanting