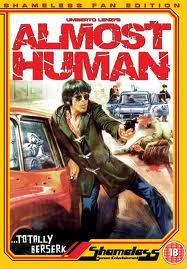 Yikes, this is a nasty piece of work. Italian cop films of the 1970s (known in Italy as poliziotteschi) are generally rough around the edges, technically and otherwise, but this one is simply ferocious, as well as having a decidedly right-wing agenda. Henry Silva plays Commissario Grandi, but he's really just playing second fiddle to Tomas Milian's villain. Milian is Giulio Sacchi, a petty criminal in Milan who we first meet as he's taking part in a bank robbery. It turns out Giulio's also a coward and he kills a cop in a moment of panic. The gang he's with is furious with his cowardice and gives him the boot after a quick beating. Giulio then gets the bright idea to kidnap the daughter of a wealthy Milan businessman. He recruits two friends for the job, both of whom barely qualify as petty crooks. The kidnapping goes ahead with much unnecessary loss of life, and ends as badly as it starts.

The character of Giulio is the main attraction of this film. To say that he's a mad dog criminal is overstating his boldness; he's more of a mad weasel villain, albeit one armed with some low cunning. There's nothing that's too slimy for him to do, including killing a child and his own girlfriend. He's also self-pitying and bitterly resentful of the middle and upper classes. In short, the filmmakers have made him the bogeyman lurking under the bourgeois bed. When panicky middle-class Italians were decrying the violence of the so-called "Years of Lead" of the 1970s it was men like Giulio they were most afraid of: the urban poor armed with a gun and with a political chip on their shoulder. Milian gives a very good performance, turning Giulio into a violently criminal version of Ratso Rizzo.

The politics of the film are resolutely right of centre. The original Italian title is Milan Hates: The Police Can't Open Fire. Not very elegant, but it gets the point across. In this film the cops are helpless in the face of even a lamebrain crook like Giulio, and can only bring justice to the streets through vigilante action. The film ends with Commissario Grandi executing Giulio outside a bar and then turning himself in for murder. It's an appropriately bleak ending for a film that starts out nasty and then gets worse. By the standards of Italian cop films Almost Human looks good and has a neatly constructed plot. This isn't a film that's easy to like, but it probably gives an accurate reading on the zeitgeist of Italy of the '70s. In the trailer below the film is called The Death Dealer, but on DVD and most everywhere else it's known as Almost Human.