Book Review: Death in the Truffle Wood (1978) by Pierre Magnan 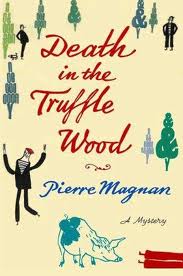 Death in the Truffle Wood falls into the category of murder mysteries that don't actually involve a mystery. Yes, there's a murder or two or seven, but the author's emphasis is on quirky characters, most especially the character of Provence. Magnan writes about Provence with an affection and detail that makes his mysteries more like regional novels. We learn about local customs, slang, the character and features of the land, and what the seasons bring.

If Magnan's novels sound like travelogues, they aren't. His mysteries are too weird and nasty for the kind of twee, mystery travelogues some writers produce. In fact, the sheer oddness of Magnan's plots makes up for the lack of a mystery attached to them. In The Messengers of Death Magnan had a murderer who dressed as a Napoleonic soldier, and in Truffle we get a flock of bodies turning up in a crypt. The deceased were all killed by being bled like pigs. The reader can't possibly guess who the killer is, but the quality of the writing makes up for that. In one chapter, for example, Magnan dovetails the activity surrounding a large wedding reception with the discovery of a body in a hotel's freezer; it's a wonderfully written sequence that would be interesting even without the addition of a murder.

I can't say that Truffle rates highly as a straight mystery, but as a novel that captures the flavour and spirit of Provence it's highly successful.
Posted by Cary Watson at 12:22 AM

Email ThisBlogThis!Share to TwitterShare to FacebookShare to Pinterest
Labels: Death in the Truffle Wood, Pierre Magnan, Provence, The Messenger of Death