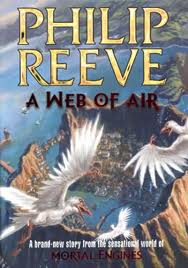 The term "young adult fiction" sends shudders down the spines of a great many readers. Even young adults. For a lot of people it means Twilight and its dozens of pulpy clones. For teens it often means issue-driven novels about bullying, drug addiction, sexism, prejudice, and so on, all of them frightfully earnest and educational. Adults like to push books like these on kids with the introductory phrase, "Read this, it'll do you good." It's the literary equivalent of a multivitamin, and just as palatable.

A Web of Air is the second prequel to the Mortal Engines Quartet (consisting of Moral Engines, Predator's Gold, Infernal Devices, and A Darkling Plain), and you won't like it at all if you insist on your young adult novels containing vampires battling puberty or teens dealing with thorny issues ripped from last week's episode of Oprah. Author Reeve somehow manages to make a wildly entertaining novel without angst or the undead by relying on those old standbys imagination, humour, and a lean, fast, exciting plot. The world of the Mortal Engines Quartet is set in the far future after the obligatory global apocalypse. Civilization is back, roughly speaking, to the Victorian age, although there are a host of mad differences, not the least of which is that cities are now giant (seriously humungous) tracked vehicles that patrol the Earth literally devouring other, smaller, cities. It's called Municipal Darwinism. The prequels began with Fever Crumb and they're meant to describe how Earth's cities went from stationary to mobile.

Web again follows the character of Fever Crumb, a teenage girl from London who's also a member of that city's Engineer class, a monkish group devoted to engineering and science. Fever has fled London with a band of traveling actors and they fetch up at a city by the sea where, I'm guessing, Portugal used to be. The city is Mayda (located inside a volcanic/impact crater) and one of its residents is Arlo Thursday, a young man who is rediscovering the principles of manned flight. Fever assists him in building a crude plane, but there are those who feel planes would pose a grave threat to cities, and they'll do anything to stop Arlo and Fever.

So there you have it: the building blocks for a ripping yarn. But that's only half the fun. Reeve is a superbly imaginative writer, and his talent shouldn't be hidden in the young adult ghetto. His ability to create new worlds and societies (always the litmus test for a top-notch fantasy writer) is outstanding. J.K. Rowling could take lessons from him. In fact, in Fever Crumb Reeve drops in a Harry Potter joke that's as funny as it is cleverly set-up. Humour is another quality that separates Reeve from the pack. When you hear the term post-apocalyptic your first thought isn't, ooh, that'll be a laugh riot. Reeve's storytelling can be very dark and very bloody, but he realizes that these moments work better when there are brief, but alternating, moments of levity.

Web is Reeve at his imaginative best. The acting company Fever travels with (echoes of Nicholas Nickleby) is neatly described, and the city of Mayda is a brilliant creation with its stately homes and pleasure palaces mounted on funiculars traveling up and down the inside of the crater walls. Add in a cult that worships an aquarium ornament from our own time and some talking seagulls, and you have one more in a series of novels that will undoubtedly become a modern classic.
Posted by Cary Watson at 10:23 PM