Film Review: Investigation of a Citizen Above Suspicion (1970) 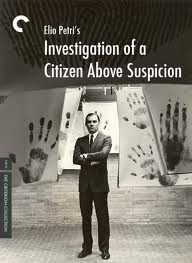 The most shocking thing about this film, from a 2012 point of view, is that it wears its political heart on its sleeve. I mean, when's the last time you saw a film that made a political statement in a loud voice and did it in an imaginative and entertaining way? Hollywood occasionally lobs liberal spitballs at easy targets like Big Business, but generally speaking mainstream films are politcally emasculated. You know this is true when Fox News has to attack The Muppets when they want to find a film that's anti-capitalist.

Anti-establishment films were practically mainstream in the 1960s and early '70s, especially in Europe, and Investigation is one of the best. The plot is beautifully simple: the head of the homicide squad in Rome murders his mistress and then leaves an abundance of clues pointing directly to himself. He wants to see just how far his position and power protect him from investigation. Along the way the director and scriptwriter Elio Petri neatly dissects the workings of the fascist mind. The nameless head of the homicide squad is a strutting bully to his inferiors, a worm to his superiors, and contemptuous towards ordinary citizens, especially those who are left of centre.

Investigation is far from subtle in its point of view, but the filmmaking is first-rate. The Roman locations and interiors are often from the Brutalist, fascist school of architecture, with the notable exception of the murdered woman's flat, which is a riot of Art Deco design elements. The difference between her apartment and her killer's is startling and intentional. The cinematography is fluid and clever, and Enno Morricone's score is, as usual, weird and wonderful.

The real star of the film is Gian Maria Volonte as the head of the homicide squad. Most film fans will be familiar with him as the villain in the first two Clint Eastwood spaghetti westerns. Volonte never made the transition to Hollywood films (he would have made a great Bond villain), and that's a pity because this film makes it clear that he was one of Italy's finest actors. He and Elio Petri, both members of the Italian Communist Party at various times, collaborated on several films, of which Investigation is the most famous, winning the Oscar for Best Foreign Language film. It really deserves to be remade, perhaps with Kermit in the Volonte role and Miss Piggy as his mistress.
Posted by Cary Watson at 9:58 PM