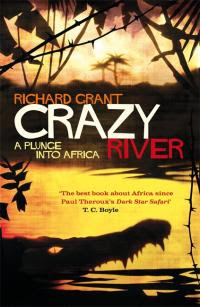 Much like the African river author Richard Grant set out to try and raft the length of, his book about the trip ends up wandering into some dead ends, hits some snags, and comes to an unsuccessful conclusion. But there are some hair-raising adventures along the way and the trip is conducted with enthusiasm and an acute eye for detail.

Grant originally went to Africa to travel the length of the Malagarasi River, something no explorer has ever done. Grant freely admits he was indulging in a childhood fantasy of playing at explorer, and his somewhat successful journey on the river, led and organized by a professional guide with the help of several assistants, makes up the bulk of his story. This part of the book has a variety of scary moments thanks to rapids, hippos and trigger-happy poachers, not to mention the usual agglomeration of snakes, biting bugs, and insufferable heat. There's no doubt this was a dangerous adventure, but, like climbing Himalayan mountains, it's utterly pointless. Grant is putting himself in harm's way purely to satisfy his own ego and to entertain his readership. Grant is fairly candid about admitting his base motives for the river trip, but there's something monstrously selfish about this kind of life-threatening adventuring that I find off-putting. When Grant risks his life he's also putting the emotional lives of his loved ones at risk. Does he ever think how horrible his death would be for his parents? girlfriend? siblings? Is risking their grief worth the ephemeral and pointless honour of traveling an unknown river? Another thing that bothers me about it is that this kind of adventure is almost the ultimate expression of Western wealth and decadence. The people Grant meets in East Africa are constantly fighting and struggling to the limits of endurance to improve their lives, or even just to stay alive. And here comes Grant spewing thousands of dollars in an attempt, as it were, to lose his life. I don't think Grant appreciates the irony of his quest, and it mars his book. And the book's epilogue leaves a very bad taste. You might expect Grant would add some updates about the people he met on his trip. Nope. Instead we get a cliche moan about how difficult it was to adjust to life in the affluent US of A after months in poorest Africa. Duh. This is tired, boilerplate travel writing and it's surprising an editor didn't give Grant a nudge about it.

The rest of the book is a rambling tour through Zanzibar, Dar es Salaam, rural Tanzania, Burundi and Rwanda. Grant was careful to avoid Western comforts and accommodation on his trip and it pays off. We get a worm's eye view of the trials and tribulations of daily life in East Africa, and it's not a pretty picture. What Grant shows us is a region that is crumbling under the hammer blows of overpopulation, corruption, diminishing resources, and national economies that have been grossly deformed by foreign aid. This is all interesting and important information, but it has to be said that other writers and journalists have beaten Grant to the punch in the last decade, most notably Paul Theroux in Dark Star Safari and The Road to Hell by Michael Maren. Both books cover virtually the same ground and issues as Crazy River, and they do a better job of it. Having somewhat slagged Crazy River, it's only fair to mention that Grant's book about Mexico, God's Middle Finger, has to rate as one of the best travel books I've ever read. He was exposed to even more danger there, but it wasn't anything that he was expecting, and what he reveals about a little known corner of Mexico (the Sierra Madres) is fascinating. If you want to get a better understanding of why the Mexican drug cartels are so brutally strong, read this book.
Posted by Cary Watson at 9:10 PM

Richard Grant at the end of the day puts out a convincing travel extravaganza.Not just a grasping adventure down Africa's Malagarasi River avoiding bullets,criminals,poachers,crocs,hippos,tsetse flies and diseases,additionally a stunning first-hand portrayal of what is going ahead in east Africa today.
@Sue Houston.