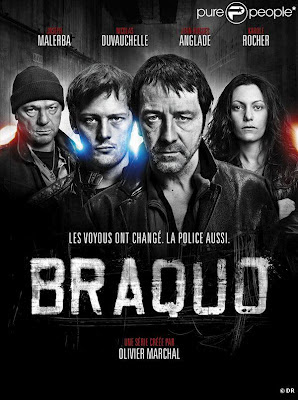 The French can make thrillers like nobody's business, but cop shows/movies are something they just don't get the hang of. The main reason is that their versions always feel like self-conscious recreations of US cop shows. Braquo is an excellent example of this. Like The Wire, it's a mini-series with a single story arc that carries us from episode one to eight. Four Paris police detectives, Eddy, Theo, Walter and Roxanne, lose their leader, Max, when he decides to violently assault a murder suspect. Internal Affairs goes after Max who then kills himself. Our team then kidnaps the murder suspect from hospital (Max stabbed him in the eye with a pen) in order to interrogate him about his partner in the killing. Oops! They accidentally shoot him through the head. And from that point on the team is trying to cover up the killing and keep one step ahead of Internal Affairs. But for every step forward in covering up their tracks they take two backwards, all of which involve more killings, beatings, and all manner of things well-behaved cops aren't supposed to do.

It's pretty clear the creator of the show, Olivier Marchal, is taking his cue from The Wire and the grittier cop films from the 1970s ( my piece on '70s "cop noir" is here). Marchal also tries very, very hard to outdo his US heroes in toughness and grittiness. And that's where Braquo gets a bit daffy and unintentionally amusing. His four cops, just to show how tough and noir they are, never, ever smile. I mean it. In eight episodes I might have seen one unironic smile between the four of them. And to further underline their gravitas, they continually look defeated, sour, disheveled and short on sleep. Poor Roxanne looks like she's taken a vow of abstinence from shampoo and combs. If one them had a lighthearted moment they might die from the bends. They also smoke like chimneys and knock back booze constantly. Like a lot of other fictional TV and movie cops these four get to live in some fabulous digs. Eddy, the leader of the group, lives on a river barge; Theo has an ultra-modern apartment; Roxanne shares a big. luxurious townhouse with her older boyfriend; and Walter, the family man, lives in an old house in Paris that is covered in vines, lived twelve little girls in two straight lines. You get the picture.What might be most amusing about this show is that the cops make one bad decision after another, each one getting them into deeper and murkier water. At more than a few points in the series I was yelling at the screen, "You morons! That's your idea of a plan?" But I was doing it in an amused sort of way.

It sounds like I'm slagging Braquo, but I'm not, really. Even with all its attempts to one-up Yankee cop shows, like some little kid trying to impress his big brother, Braquo is still quite entertaining. The acting is very good, it looks great, there's violence aplenty, and the bizarro plot keeps you hooked because it's hard to believe how things are going to get worse for the cops. But they do. I've only seen season one and it ends with a rather monstrous cliffhanger, and it looks like the succeeding season will consist of the team, as per usual, not doing a jot of actual police work, but, instead, there will be a lot of drinking, smoking, bad hair days, torturing of suspects, and assassinations of crims. I just hope Roxanne gets a chance to take a shower. By the way, "braquo" is supposedly Parisian criminal slang for a big heist. I think it's more likely to be Parisian cop slang for "D'oh!"